I really need to get back to reflective philosophy again: work and children do take their toll.

The visit is over; the girls flew through passport control this morning and are somewhere over Greenland now. We had to compile CDs with all of the collected trip photos: 976. Cheez…but, 10 days, three people, I suppose it’s reasonable. 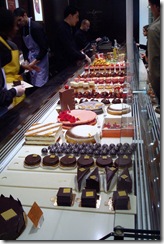 The premier chocolate shop in Paris was reputed to be across from our hotel in St. Germain: Pierre Herme. Unaware that he had been named “The Picasso of Pastry” by Vogue, we discovered it by joining a line of people in front of the doorway to see where they were going. (Yes, that’s a general rule for discovering good stuff in Europe.)

Once inside, left, we found a wonderful array of pastries 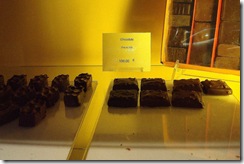 and frantic buying at 10 euro minimums. We bought a treat to sample, but noted the locked cabinet, behind us. It must have the good stuff: 100 euro a pop. It really begs the question of how something like that is valued, or why someone would buy it.

Yes, it’s a red light district snow globe. My daughter brought it home, coffeehouse on one side, little tiny ladies on the other. I *never* find stuff this good. 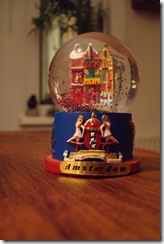 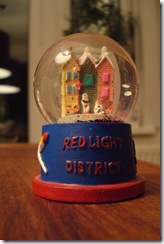 The Ark along the Arnhem waterfront has now been replaced by a fortress. Very cool if it were a bouncy castle, but I think they just parked it there to mess with the minds of the drug rehab boat a few berths up. 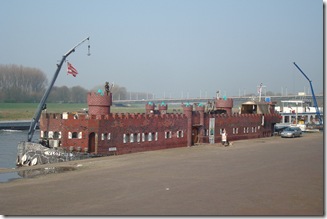 And, finally, a few adventures in merchandising…Arnhem on the left, the Paris marathon on the right. 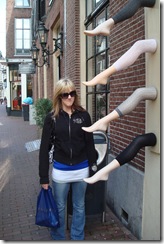 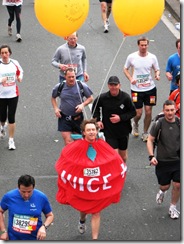 email
« 'Not a bad day in London
One picture; two thoughts »
Radar Weather