Wrapping up in London with the girls last night; we do Cambridge today, then back to the Netherlands and they’re out from Schiphol at mid-day. The college has no public Internet, so I’m doing things the old way: camped out in the spring sunshine behind the rooms, borrowing some bandwidth from a neighbor over the fence. I remember when we all used to do a lot more sharing before becoming so security obsessed. 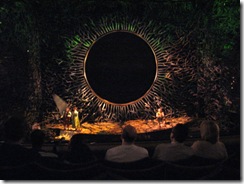 We went to see “Lord of the Rings” at the Drury Lane theater in London last night. It’s a wonderful performance: the story flows well, the songs and dancing (except for a long soliloquy in the third act) are inoffensive, the audio was crystal clear, the orchestra was solid, and the special effects and staging are awesome. The hike through the dwarf mines leading up to the intermission, the Black Riders, the Orcs searching for Frodo, the magnificant spider, and Golum were all really well done.

Tickets were 32 gbp for excellent 1st mezzanine seats at the TKTS half-price office at Leicester Square (40 at the “real” half price windows off the square: always go to the real thing!). Note: the production closes on July 19, this summer.

The statue of Alison Lapper, the limbless, pregnant woman in Trafalgar Square, is gone. I have to admit that I struggled with the statue as public art when I first saw it, mainly for it’s jarring contrast to the setting amidst men on horseback, huge bronze lions, and Lord Nelson. Over the years I’ve become fond of it though, so it was a surprise to find it had been replaced by stacks of colored plastic rectangles. I really don’t like the new work: it’s just faceless corporate art. But maybe the contrast is supposed to make me think. 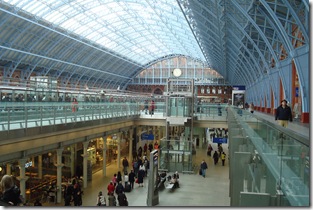 I did visit the new rail station at St. Pancras: the arching blue ironwork is great, but the whole terminal reminded the girls much more of an airport than a historic rail station. I do agree that a lot of character was lost in the makeover: contrast the spotless acres of tiled floors and walls with the Victorian brickwork of Kings Cross (not to mention the ever-popular Track 9 3/4 off to one side)

And, of course, the usual foolishness at Cambridge 🙂 The girls want to know if there is a “Studs of the Cam” boatsman’s calendar of the guys doing the escorted punting tours..

email
« What are the common differences across Europe?
Artifacts »
Radar Weather