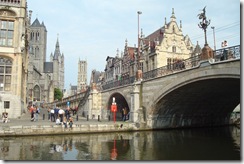 My passport lies somewhere on this lively street in Ghent.

I’ve never lost a passport before, and am still kicking myself for doing it this time. My small Grey wallet with my passport, USB stick, Bluetooth earpiece, business cards, and bank decoder was under my arm, along with my umbrella, when I left the hotel, and was no longer there when I reached the conference center. I immediately walked back along the street twice, but no luck: someone was quicker than I was to spot it.

All’s well, but there are some lessons learned along the way that might be helpful to others in a similar situation.

1) Make a backup. Years ago, someone suggested that I put a scan of my critical documents up on the Internet where I could always access them from anywhere. So I scanned my passport, driver’s license, and birth certificate in a password-protected file that I mailed to a supplemental Yahoo account. It was easy to just download and print it to have all of the information and documentation that the embassy required.

2) Keep your residence card separate from your passport. I had my Dutch cards in my wallet, so those didn’t get lost. As it turns out, those cards are the important ones: the visa and passport stamps pare irrelevant, superceded by the residence card. I can still travel within the Schengen Area and verify my Dutch residency with that, alone.

3) Report the loss to the police. I was reluctant to do this: I knew that it was really gone, and thought that filling out a police report was a waste of time and an invitation to trouble. A friend convinced me to talk to the hotel clerk, who was happy to call the local station and give them the information about the loss. As it turned out, it mattered. The Belgians tend to put “found” documents into the nearest postal box, where they find their way (eventually) to the police, so it could produce a result. And the US embassy really, really wants to hear that you did tell the police (although you don’t have to show them the report).

4) Consult the Embassy on-line. The US Embassy has a section for what to do if your passport is lost or stolen. There are two forms to print and fill out before you go to Amsterdam: one to report the loss (DS-64), and another to apply for a new Passport book (DS-11). You will also need information about your old passport: again, the importance of having a backup.

5) Make an Appointment. The US embassy REQUIRES an appointment for everything: showing up at the gate at 8:30 am to try to plead through the intercom is futile (I saw people do it). Make the appointment on-line, and be there on-time or you will not be admitted, even to drop off the forms. Bring the forms, your birth certificate (the Apostille worked well), and two passport photos (make sure they comply to new US rules for size and composition). If you are asking for expedited service, you need to bring proof that you are traveling within the next 10 days. And bring a credit card or cash (68 euros for me).

6) Bring no more than you need to. The Embassy is absolutely paranoid about letting you bring anything into the building. Leave the computer, camera, cell phone, Mp3 player, USB stick, outside: they will confiscate it at the door further delaying you going in and out. Similarly, don’t bring friends: fmaily is okay if approved when you make the appointment. Do bring photo ID, filled-in paperwork, patience, and a smile. And change enough for two hours on the parking meter.

7) What is an emergency? The web site says that an emergency document for immediate travel is issued if you are flying out within 10 days. In fact, they process replacement passports faster, and the desk agent said that they prefer to do it only for 5 days or less. Similarly, the web site says that you can come without an appointment if you are traveling within 10 days: in reality, it’s 5 or less.

Postscript: June 5. I never did get a phone call, so, expecting the worst, I made an appointment, took all my paperwork, proof of travel, and new photos and went to the Embassy this morning. Fortunately the passport was there. it’s one of the new ones with lots more anti-counterfeiting detail inside and an embedded RFID chip. It also has an endorsement that it is a replacement for a lost passport: I was advised that if you lose two within ten years, then you start getting issues special ones with shorter terms.

email
« An interlude for the Visual Arts
Yes, there is a Schengen (Luxembourg) »
Radar Weather