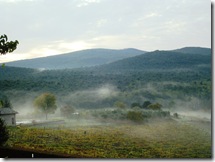 The Social Plan negotiations ended yesterday with a presentation to the employees about the shutdown arrangements and severance proposals. There is now a week’s period for consideration and discussion before the vote, and a simple majority will determine the outcome. I’m not a part of the arrangements, since I’m here under expatriate rather than Dutch, contract. But the hallway conversations sound positive, and I anticipate that the team will accept the proposal.

Things will then move quickly to a conclusion. The Dutch are ready to wrap things up as fast as possible; Corporate wants to execute the transfer to bring the product home. So, it now seems certain that the remaining timeline is set. Within three months, all of the activities will be complete: all that will remain is to take down the flag and sell the building.

As I write this, reflecting, it’s hard to capture my feelings. I’m not in denial, but it’s hard to grasp that everything familiar will soon be gone. I imagine that it must be how people feel ahead of a hurricane: even though the mind fully grasps it, the coming event is hard to take in at an emotional level.

For myself, the feelings are compounded since very little of my old life will continue into the new. I spent June bringing many things to closure, toasting the past and sharing a sense of completion. Now, though, it just feels empty and ended.

I stand at the journey’s dawn, once again.

That anticipation reminds me a lot of times in the past when I was leaving familiar surroundings to start something completely new. Often, I found myself rising early, unable to sleep, and went outside to stand in solitude on my doorstep in the pre-dawn chill. The homes around were quiet, dark, and still; the farewells and good wishes were all taken. There was, truly, no turning back.

And there was the road ahead, disappearing into the thin mists drifting in from the fields.

I’ve always been able to take those first steps forward with resolve, with confidence. Still, it’s an effort not to look back, wishing for what could have been.