‘back from a few day’s holiday to tour Strasbourg and the Alsace wine country: I’ll share photos of the region (and the night that the forest invaded our village) as I get caught up this week.

On the way down, the road leads through through the Moselle valley in southern Luxembourg on the way to France, and I was intrigued to find that we was passing near a village of Schengen. My imagination (dulled by miles of rolling hills) associated to the Schengen Treaty, which gives us borderless (and, fortunately for me, passport-less) travel in Europe. If, indeed, this were the virtual center of the Zone, it should be worth a visit.

Spontaneously, then: ‘off the highway, up a hill, along a winding street and, suddenly, back into open vineyards. First observation: Schengen (pop 425) doesn’t take long to see, and it certainly doesn’t advertise it’s connection to history. 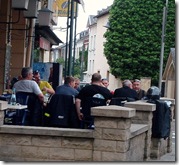 Backtrack, looking for plaques or monuments. Nothing to be found except a possible group of Dignitaries debating the next steps of Union in front of the town’s only restaurant.

I was about to give up when I spotted a sign pointing to a European Centre down near the river. 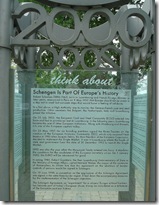 Here, at last, a small monument confirming that this is THE Schengen, explaining how the vision of Luxembourg led Europe into a united future. Beyond lay a manor house where the treaty was actually signed, some odd wire statues symbolizing Peace and Hope, and a sleepy cafeteria. It’s a nice spot: ‘easy to imagine the delegates strolling the gardens, sipping wine by the river, and, like modern-day Founding Fathers, finally gathering to sign the treaties.

Adjacent, there is a small conference room filled with free EU educational (promotional) materials. I picked up hard-to-find copies of “Europe in 12 Lessons”, “Better Off in Europe (How the single market benefits you)”, and “A Guide to Schengen Enlargement (Citizen Impacts)”. Even better were the collection of posters: my wall now holds a great map of Schengen’s Europe (with a hole where the Swiss should be) and a “Path to the Euro” timeline. No shirts or mugs, but there is a vine covered tower that is kind of cool to climb for pictures. 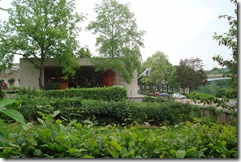 Sleepy and a bit off the path, Schengen seems like an unlikely epicenter. Maybe its better to enjoy some of the region’s crisp white wine and simply reflect on Luxembourg’s hopeful contribution, one that touches each of us every day.

email
« What to do if you lose your US passport
It's Complicated…. »
Radar Weather