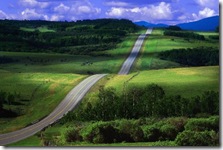 It’s been fun driving a big triangle of seven-hour trips across Germany this week, first from Arnhem to Berlin for a conference, then Berlin to Zurich to spend a day with my brother and his family, and finally Zurich back to Arnhem for work Monday morning.

The Dutch only drive long distances when there are three week’s vacation waiting at the far end of the road: then they will drive 30 hours straight-through to get there. But for me, the journey is the joy. Once out on the road, I settle back into a familiar rhythm of automobile travel: the changing topography and scenery, the evolution of light and weather, the chance to carry a thought end-to-end (or not) amidst the whoosh of wind past the window.

I also catch up with podcasts. This trip, Tom Ashbrook had a good discussion of “Summer Vacation’s Golden Age: The American Family Road Trip”. It was nostalgic: my family faithfully took a three week road trip every summer as I grew up. The stories people told brought it all back, reminding me again of how I came to resonate with this as my preferred vacation.

Every spring there would be a dinner declaration of where we would be going for the summer: always a big loop of about 3000 miles, generally out to the Rocky Mountains. My mother would order the TripTik from AAA, a flip map of detailed directions accompanied by Tour Guides. In June we would organize a mountain of clothes, camping gear, kitchen implements, and campfire supplies in the living room. The children each got to buy some magazines, pick some books, and agree on a couple of games to take along. 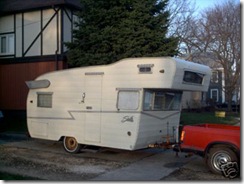 It was all cached in a 1962 Shasta Astroflyte trailer, “Henrietta”, that my father pulled behind a big station wagon. When it was all packed, there would be a big sendoff with the neighbors, and then we’d turn west out of Cleveland towards the distant plans. The road to the Rockies was always a grind of hot, 8-hour days across flat, monotonous interstate highway. My father used to play “How Far Is It?”, pointing out a distant bridge and letting us guess what the odometer reading would be when we got there. Days were broken up by lunch at schoolyards, afternoon ice cream, and fierce competition to see who got to sleep in the overbunk each evening.

It was always exciting to catch the first glimpse of the mountains, the peaks hardly distinguishable from the clouds. It meant that the trip would slow so that we could linger in national parks and forests, hiking or boating during the days and going to ranger talks at night. There were always other kids to meet and nearby woods to explore. Each year produced a new bear story, as someone got surprised by a brown bear while stepping out after breakfast or returning from the toilets. And every evening ended with a campfire, burning marshmallows, writing names in the air with smoke from “fire sticks”, and a sing-along.

And then, in the fall, the trip’s albums would be finished. My father would have painstakingly edited the movie film into a travelogue of the trip, with alphabet block titles filmed while we pulled wooden cars across the frame beneath the words. My mother would unveil her scrapbook featuring daily journal entries, pictures, and all of the tickets and brochures collected along the way. I haven’t seen any of it in decades, I hope there are big boxes with these treasures stashed away.

I carried on the tradition in my family: we criss-crossed North America every summer until the kids were about ten, visiting relatives, parks, and cities. We didn’t camp as much and never kept a journal. The pictures fill drawers back home, still waiting for the day we would sort, organize, and mount the galleries. I abandoned TripTik’s in favor of a good atlas.

But it was great experiences for the kids and time together as a family when they were growing up. And I think that it did establish my predisposition for enjoying a cross-country automobile journey. Whether Germany or Wyoming, I still feel most ‘on vacation’ when there are 80 miles until lunch, four small towns to choose from, and an hour to decide among them.