I’m on the road for a week: four days in Minneapolis, then four in Seattle – Pullman.  The Minneapolis part is to settle an interim position for the next eight months in Europe and to lay groundwork for options after that, while the Seattle visit is to move my daughter to college.

The Dutch women continue a strong showing in the Olympic keelboat competition: after six races in the Yngling keelboat, they are in second place, three points behind the always-strong British team and 14 points ahead of the third place US and Australian teams, tied.  So far, the Dutch have four medals, three in Judo.  Who would have thought that?

I’ve written before about the web presence that we are all establishing, mirroring our real-world lives.  We leave a trail behind us as we surf, log into sites, post pictures, send tweets, blog, comment, mail, and surf.  This data is increasingly aggregated and indexed into public and for-profit information services: my google-tail grows ever longer. Brian Sortis recently tried to organize his web 2.0 halo.  He’s found, like me, that you can group and organize your web presence and, armed with the map, can even make some progress towards making it consistent and manageable.  His social map, left, charts the communities that he’s involved in.

I really liked his attempt to map the entire social networking space in what he called the Conversation Prism, below.  He intends that it "chart online conversations between the people that populate communities as well as the networks that connect the Social Web". 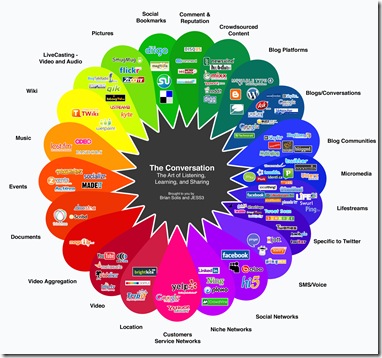 I find that I traverse a good fraction of this space on a daily basis: it’s amazing how quickly many of these services became a part of my life.  They diminish the barrier of distance and create conversational interactions for me with friends and colleagues across the globe.  They have become a rich source of information and opinion that gives me new perspectives and instant answers.  It is a dynamic and generative medium, with new tools and services bobbing up to challenge the way I think about solutions to work and life problems.

At the same time, the seductive visage hides very real faults.  Too often, consensual truth masquerades as fact: if everyone agrees, then it must be so.  It nourishes the fantasy of extended influence: pages of hits on Google and a busy wall on Facebook prove it.  And it need not have any grounding in the real world: everyone can become whoever they want to be.

The good far outweighs the bad, though, and I think that the Prism has enriched my human contacts more than it has degraded them.