Our day began at 4 am, when a stray thunderstorm wandered north of Seattle and the flash and crash tumbled both of us out of bed.  No arguing with nature’s will: we packed all of the bags and boxes into the van and hit the road.  It’s a strange feeling, she’s lived her whole life in this same house and now she’s not.  We talked about school and the future as the sun rose over the mountains and the road unwound to the east.

It feels strange how little she actually takes with her: probably not much more than I took to Holland.  The ’empty nest’ isn’t really about the gap left behind when they go.  Families spend years assembling artifacts and memories into home and traditions.  I think it’s now about that nest, abandoned at last, and so little of it taken along to start her new life.

And what purpose or future does everything we all built up have now?  I’m reminded, again, of Robert Waller’s poignant essay, "Excavating Rachael’s Room".  Read it (page 3-5). 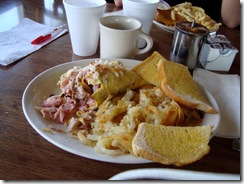 Descending into the desert beyond Ellensburg, she was asleep and I drove on lost in thoughts.  We left the highway at Straus, a small farming village lost in the golden grasses and black basalts of the Palouse.  We switched drivers and rolled on through the hills and hard farmland to Pullman.  It was 111 degrees F (44 deg C) when we pulled into the University, I don’t think I’ve seen weather that hot and dry in years.

We found a rolling card and picked up the room key, parked near the dormitory and rolled all of her things up.  The rooms were bigger than I expected, with plenty of storage space.  The afternoon sun really pours into the room: it’s going to be tricky to keep the temperature down.  I offer a bit of fatherly advice. 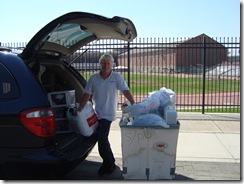 It’s different moving a daughter: she was better organized than my son, and took more care that things looked right and went to the right places than he had.  she tossed me a bag of things to be hung, bundled separate from things to go into drawers.  We worked on the bed for a while, getting the sheets arranged and mattress oriented properly. 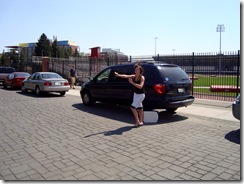 We made a run out to Moscow pick up a dozen stray things: a mirror, small stepladder, a cable, an extra pillow.  She’d brought some tools, so I got the TV table assembled and went to work trying to get her computer to talk to the school’s internet connection.  I got the cable TV working, but was still sorting out the computer when we had to call it a night: their antivirus and her’s didn’t want to talk with one another.

Tomorrow’s another day; I’ll get it sorted.  I brought a small bottle of wine to share, to toast her success, and ours.  Then I turn the empty van back west, and she starts sorority rush and picks up her books.  Each to their own adventure; both to our futures.