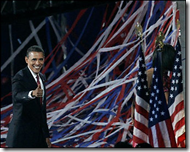 I watched Barak Obama’s acceptance speech last night (as I’ll watch John McCain’s in full next week). It was well written, well delivered, hit most of the issues that I align with him on. I wish that something more had been said about restoring civil liberties, banning torture, and closing Guantanamo ( a comment echoed by Slate). I thought some of the promises for Iraq, health insurance, and tax reform were simply unrealistic.

But my biggest concern was that it felt like performance rather than personal communication. Set in a stadium, surrounded by prop pieces, scrolling 50 minutes of applause lines from his glass teleprompters, it was devoid of any hint of the man behind the words. Michelle Obama’s talk felt more genuine (although her gestures were distractingly overchoreographed), and even Hillary Clinton was more personable than I’d seen her on the campaign.

The Herald Tribune (AKA, international edition of the New York Times) put their finger on it yesterday in an article asking whether this resulted from his own obsessive self-improvement. He critiques himself with “I need to get better”, almost able to stand outside of himself to assess and improve. “His virtuosity, his seriousness, his ability to inspire, his seeming immunity from the strains that afflict others – may be among his biggest obstacles.” His self-detachment may prevent others from making connections as well.

Charles Krauthammer at The Washington Post echoed the thought this morning:

The oddity of this convention is that its central figure is the ultimate self-made man, a dazzling mysterious Gatsby. The palpable apprehension is that the anointed is a stranger — a deeply engaging, elegant, brilliant stranger with whom the Democrats had a torrid affair. Having slowly woken up, they see the ring and wonder who exactly they married last night.

I can’t support John McCain, but I wish I felt better about Barak Obama.