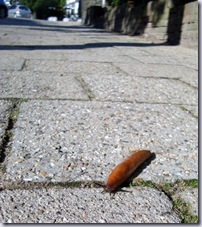 There are a lot of similarities between the Pacific Northwest and the Netherlands.

The atmospheric environment is almost synchronized between the two, with wet, gusty maritime weather systems and moderate year-around temperatures.  It’s around 20 deg C in both areas right now.

In either case, winters are dark and burdened with near-constant drizzle and mist, but both have glorious early fall days when the skies turn warm as the leaves begin turn.

Their cultures look outward and forward, progressive and tolerant.  People  like their bookshops, strong coffee, and outdoor activities.  There is limited land available for people to live, further defined by water spread across their geographies, which makes for close neighborhoods and awful traffic snarls on the motorways.  Both have sprawling tulip farms.

There are differences, of course.  The mountains give Seattle a contrast that is lacking in the flat Dutch landscapes, and the gigantic evergreens that fill the Northwest can’t find root in the sandy soil here.  People don’t go boating as much in Holland, they don’t bike as much in Seattle; they don’t snowboard in the Netherlands, they seldom Ice Skate in the Pacific Northwest.

And Seattle has slugs.

Huge banana slugs are a constant element of the Seattle environment.  Mornings and evenings, I always found large numbers of them oozing across our walkways and into the gardens.

When the kids were little we joined a cooperative preschool: I was naturally a science activity coordinator.  One week, we built a ‘slug-farm’ as a nature project, filling an aquarium with banana slugs.  They are actually pretty tranquil, gliding across the glass and curling up together in corners.  (They are also pretty stupid: if one fell into the water dish and drowned, they all followed).

I hadn’t realized seen slugs in the Netherlands, although it seems like a natural place for them to thrive.  So, it was nice to come across an old friend from Seattle, sliding across my sidewalk yesterday morning.  Small and brown (rather than fat and green), but, still, a familiar face and a twinge of nostalgia.

email
« Watching the markets swoop and plunge.
Visible signs of the coming of Winter »
Radar Weather