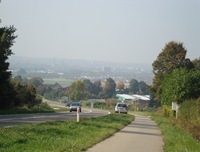 I just returned from a couple of days in Maastricht, starting the transition process to a new job and the search for a new place to live.  It’s a little exciting, it’s a little discouraging, but it’s definitely a big step into the future beyond Arnhem.

Maastricht is a different city in many ways.  It straddles the Maas river, where Arnhem lies entirely to one side of the Rijn, giving it a very different and more picturesque character.  The older, medieval sections are still intact and thriving, and there is a large student presence that gives the culture a fresher edge.  I really liked the winding pedestrian byways in the oldest part of the city, and the many galleries and historical sites to visit.  The close-packed and busy street life might make it an attractive place to look for an apartment.  Similarly, the Wyck district, east across the river (below left) has a lot of character and could be fun.

The rental agents tried to steer me into the Ceramique district, above right, just south of the Wyck.  It was once the site of a sprawling pottery factory, later closed and claimed for renewal by the city.  There are many new apartment and office blocks created by outstanding architects, and the interiors are fresh and modern.  But, at street level, it is quiet and sterile.  The interior courts seem shadowed and  the parks are sparse and ornamental.  I know that it’s supposed to be the place for professionals to settle, but it just doesn’t appeal to me.

Back across the river, Villa-Park (below, left) is a bit reminiscent of my neighborhood near Sonsbeek, but lacks the parks and bustling families that make this such a great place to live.  To the south, both banks of the river have industrial areas all the way to the Belgian border.  There are attractive villages to the east, Meerssen and Valkenburg (below right) are each attractive communities connected by 10-minute train rides to the central Maastricht station.  However, there are few furnished apartments out there, and I’m mindful of all of the peculiar stories that other expatriates tell of village life among the rural Dutch. 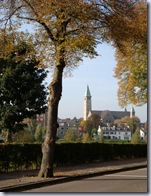 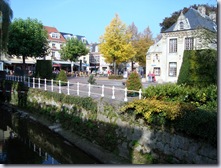 On balance, Maastricht seems like it will be a better place to live, but that it won’t have better places to live, if that makes sense.  Still, I’m keeping an open mind beyond these first impressions and will return for another round of apartment hunting next week.

Advice is welcome if you have any good, local information!