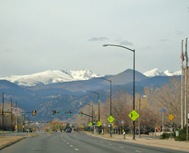 ‘beautiful morning here in Colorado: the sun is out, the air is crisp, and the snow is sparking on the mountain peaks to the west.   My father is doing better than I could have hoped: I honestly would not know that he just had surgery by his appearance.  He is up and moving well, and is working hard with his rehabilitation staff.  He’s still a bit superficial conversationally, but has moments discussing economics or politics that reflect his pre-surgical style.  I think it really bodes well for continued improvement when we bring him home tomorrow.

The election remains topic #1 among the people I meet.  The overwhelming sentiment is that it’s a good thing: people liked his election night speech (‘hated her dress though), and approved of  his press conference yesterday (although the “Office of the President Elect” podium is a bit pretentious).  His speaking cadence is really a change, a bit choppy, but I generally like the thinking and the decision-making process on display. He’s got to watch out for making small off-the-cuff jokes, though, whether about lipstick on a pig, pound mutts, or Regan séances.

In contrast, the main conversation topics about President Bush is how the First Dog, Barney) bit a reporter, and how hundreds gathered in the street outside the White House on election night to sing “Hey hey, good bye”, usually reserved for sports victories.

But talk is already moving away from presidential politics.  The local college (American) football team won a come-from-behind victory; the students were out late throughout the pubs and sports bars for a Saturday night celebration.  The stores are decorating for Christmas and seem reasonably full: reports that people are staying home and hoarding cash seems wrong to me.  Gas is now below $2 per gallon, but nobody seems to be taking that for granted.

People still marvel that the price could swing almost 200% and back over a period of months this year; it gives everyone a feeling that forces for market manipulation, rather than of supply and demand, are at work.

My son left a terse “Call me” text on my cell, then a “call back in 10 minutes” hang-up when I dialed him.  This is going to be what it’s like as a military parent, I suppose: he gets his orders and is off.  In this case, he’s doing further training up at Fairchild AFB, and then returns to Oklahoma for specialty training before heading to an AWACS wing in Alaska.

I’ve got a ‘second opinion’ meeting with a physician here tomorrow to further define my options for addressing the muscle weakness and misalignment in my ankle.  I’m not seeing much good in the consultations, nor can I ignore the issue much longer.  The US term would be Hobson’s Choice: "Take it or leave it."  If they can assure improvement and future mobility, I’ll take the option: I’ve got a lot that I want to stay active in for years to come.