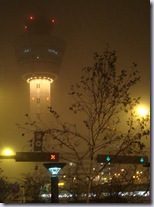 I came back through Schiphol late yesterday evening: it had been a long few days of meetings and interviews.  The fog had settled in over Amsterdam, and the flight up from Geneva was delayed by hours.

I was only half-awake when I hit Immigration: as is custom, the officer glanced at the residency card and asked if I spoke Dutch.  Yes, I smiled.  There was an unintelligible burst of Nederlands: it wasn’t the evening to go native.

Switching back to English, he asked if I had voted in today’s election.  I assured him that I did.  He smiled, “And did you vote for Obama?”.  I smiled, Of course.  Passport stamped, entry obtained.

I wonder if I’d have gotten in if I was a McCain-Palin supporter?

I’m happy with the election outcome: I woke at 5 am to watch CNN call it and to listen to the speeches by the two candidates. I thought that John McCain was gracious and forward-looking: it was a good moment for him.   Obama similarly kept his focus on the future and, watching him, it reaffirmed my choice.  If he can manage expectations and focus on crafting more remedies than rhetoric, he will be a wonderful leader.

Still, I’m also glad to see the Democrats are being held to less than 60 in the Senate, forcing them to reach across the aisle.

And, finally, it’s wonderful to finally be saying “good riddance” to the know-nothing, ideological, dysfunctional crowd running things from the White House today.  The Countdown Clock is running…

Christine Gregoire won the governor’s race in Washington State, which also delights me: her opponent would have turned the state over to mining, timber, business, and building interests.  The statewide initiatives are mostly going my way, and the local races are falling towards solid reformers.

The election of our first black president is a historic moment and is a real milestone capping 50 years of progress from the beginnings of the civil rights movement.  Still, I hope that the references to our ‘first black president’ will fade soon.  The true measure of our progress is that the vote felt color-blind: people voted in hopes of effective leadership, bipartisanship, and new ideas, and not to make a civil rights statement.

I was surprised at the variety of people that had voted for Obama this year.  My brother and his wife, staunch free-market conservatives from Alaska, both voted Democratic for the first time in recent memory.  Many others who are usually among the low-tax, less government wing of politics similarly switched over this year, fed up with the fiscal mess, the war, and the symbolism  of Sarah Palin.

The Financial Times has asked, intriguingly, whether we are seeing a permanent crossover between the two parties.  Upper-tier voters, fleeing the social-evangelical tilt of the Republican party, will end end up becoming Democrats, while the blue-collar unionized voters continue to drift towards the right. 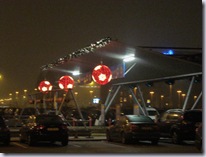 Meanwhile, at Schiphol, the Christmas Balls reappeared over the parking area…the holiday season has officially begun…