A fellow blogger’s recent post alerted me to the N8 Museumnacht Amsterdam held across the city last night.  It looked great: roughly 40 museums open from 7 pm until 2 am, accompanied by special showings, performances, lectures, and activities.  For 17 euro, patrons get access to every venue, as well as free rides on all city transportation and another day of free admission to a museum before the end of the year.

To take full advantage, it made sense to drive over from Arnhem early, buying tickets mid-afternoon in freezing rain and piercing wind, then securing a hotel booking.  The detailed (entirely in Dutch) programme offered at least a dozen worthwhile new places to see over the 7-hour open period.  Fortunately, most clustered into three geographic groups, making it easy to skip from one to the other.

So, at 7 pm things started at the Artis Park housing the planetarium, zoo, and aquarium.  Venues are easy to reach, transportation is frequent (but crowded), and each entrance is marked with a big flashing colored light cube.  The planetarium was a bit slow getting their sky-show kicked off, so the zoo-queue looked like a better alternative.  They give you a group number and usher you into a waiting area to wait to be called; there was a brisk trade in gluhwijn and broodjes that probably floats the zoo’s budget for a month.  The tour was good fun: the animals were puzzled or sleepy at having repeated intrusion of guests and flashlights after dark, and the guides kept up running Dutch commentary on the natural and social history of the park.  We ended at the entrance to the aquarium, a good opportunity to wander the marble halls and debate which was the prettiest (or most repulsive) exhibit. 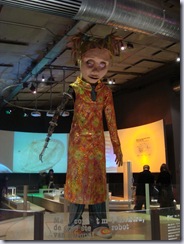 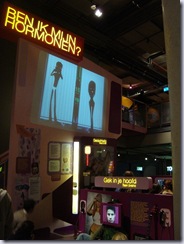 It was a few blocks walk onward to the Oosterdok, where the ARCAM architecture center, the NEMO Science Center, and the Scheepvaartmuseum are located.  More refreshment prior to entering NEMO, then plunged forth into the various interactive exhibits.  It seems geared towards children and teens with lots of interactive games, but if you’re willing to get hands wet, it’s a fun time.  There was a competition to generate the most power from a water wheel by diverting water (the secret is to create a waterfall, not a rapids), and a popular discussion of puberty titled “Ben Ik Mijn Hormonen?”  The party areas were slow to kick off, so the ship seemed like a good alternative.  However, it was a bit cold and wet to wander around the decks, so onward to the city center. 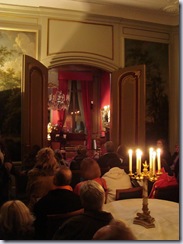 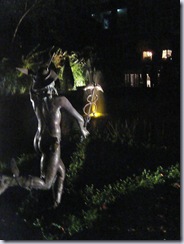 The Hinlopen and Van Loon houses were open, exhibiting classical Dutch arts and architecture, circa 1680.  The Hinlopen Huis ushers you out into a darkened garden, where people crept along by the glow of cell phones making their way to the main house.  The rooms were opulant and there was a harpsichord soloist to set the mood.  But I thought that the Van Loon house, filled with actors and everyday items from the period, captured the Golden Age lifestyle better.  Lines were long to get into the FOAM gallery, so the Rijksmuseum would be the last stop. 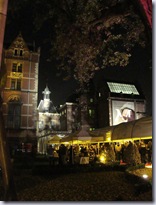 It was nearly 1 am when we joined the line outside the museum.  The Dutch were incredibly engaged with the events all evening: the lines never flagged and their interest never seemed to wane.  I can’t think of another culture that would wait 40 minutes to tour the Masterworks collection past midnight.  Damien Hirst’s artifact, a diamond-encrusted skull titled “For the Love of God”, might also have been the big draw.  I thought it was anticlimatic though: after seeing so many examples of really great art, this work just seems shallow and manipulative.  (Maybe I was just getting cranky at 2 am).

There were post-parties until dawn, Oliebollen at the corners, and I was tempted to have a last drink at Leidseplein, but in the end tired feet and a weary mind led only back to the hotel.  Still, it’s a fun event and well worth coming into the city for the evening.  I’m already scanning the guide for next year’s opportunities.