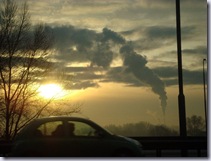 1- When I tell Dutch friends that I live in Maastricht, they all wax rapturous about the city. They say it’s a wonderful place to live, I’m lucky to be there. Waarom is de stad zo leuk? (Why is the city so nice?)

When pressed, the Dutch may talk about the culture, the architecture, and the proximity to Belgium and France before shrugging and simply saying it’s gezellig (~comfortable). A few folks said that it nice for not being particularly Dutch; at least one referred to its history and Dutch pride for having added Maastricht to the country in 1839.

I haven’t been able to think of a rapturous United States city that people would speak about as the Dutch do about Maastricht. The closest is the way that ex-New Yorker’s talk. Somehow, though, it’s captured the collective Dutch heart. 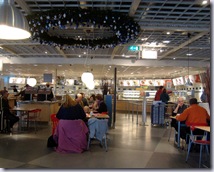 2- When I say that I’ve been going to Ikea to find furniture and household items, the Dutch are quick to recommend that I be sure to eat there. Umm, Ikea? Waarom zou ik eet om IKEA? (Why should I eat at Ikea?)

Although the idea never appealed to me, I found myself at the outskirts of Eindhoven one recent morning, looking for coffee, and I spotted the full Ikea parking lot. So, why not?

It turns out that Ikea serves a 1 euro breakfast with a roll, cheese, egg, and coffee. Adding a bit of ham and condiments, juice, brought the tab to 1.95 euro. And there is unlimited free coffee until the store opens at 10:30.

Needless to say, the Ikea cafe is packed. There is a play area for small children (who are distressingly gathered around Disney videos rather than the many toys scattered around), lots of small groups of friends having coffee together on the way back from exercise or on the way to the day’s errands. It’s the closest thing to a community gathering center that I’ve seen. 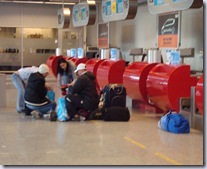 3- When standing in line for flights, I often see small groups of people frantically packing their bags near the counter. Others will be stuffing purses under coats. Everyone is biting their lip as they present their bag at check-in (or don’t). Waarom doet iedereen op het vliegveld pakken? (Why does everyone pack at the airport?)

This is all caused by the ever-tightening carry-on and baggage rules for RyanAir, in particular. There is a 15 kg limit for checked baggage, a one carry-on rule, and a limit of 10 kg and 55cm x 40cm x 20cm dimensions for cabin bags. They check all of these qualities religiously, and there is always frantic redistribution of goods when someone breaks a boundary. I’m forever having to slip my shoulder pouch into my computer bag just to get past the ticket counter. 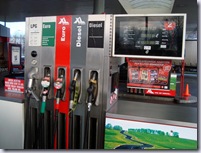 4- Gasoline choices are becoming ever more numerous. The stations offer benzene (gasoline) and diesel, both in low- and high-octane grades. There is also a blue biofuel spout at many stations that seems to be a specialty fuel. Lately, there is an LPG (natural gas) spout as well, with a unique nozzle that clamps onto the alternative vehicles. Waarom zijn er zo veel brandstofoliepompen? (Why are there so many fuel pumps?)

Dutch enthusiasm and EU mandates. No sign of recharging stations yet, but I really like the easy availability of alternative fuels across the country. I haven’t been able to find any statistics that show the relative consumption rates of the various fuel types, but the EU generally and the Dutch in particular seem to be making good progress on establishing infrastructure that should pay off in the long run.