The conference center’s across town from the apartment’s neighborhood, which made for good opportunities to criss-cross the city a couple of times each day.  Since the traffic is uniformly terrible, there’s always time for looking and thinking…

I was surprised by the near total lack of Christmas decorations.  The apartment agent said that the Italians don’t do a lot of displays anyway, and the financial meltdown had taken away the shoppers. ‘hard to believe, but from St. Peters to the Coliseum, Rome was largely dark.

Rome does, however, have an amazing sense of style, everywhere, and on everyone. 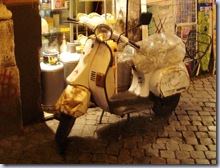 Rome is filled with scooters.  They snake between the cars, bunch ahead at lights, and demand lanes between cars where they can stream ahead.  It’s probably the most efficient way to get around the city, and it seems like a great opportunity for electric or hybrid models that would minimize pollution.  I never saw one, though.

There is a sense of history everywhere, stone structures and crumbling walls that always remind me of the days of empire.  I wonder about the everyday Italian’s perspective on their history: is it just a bit of overlooked background, a source of pride, a golden age to feel wistful about.  Many European countries had their century in the sun, long ago passed.  Rome’s was particularly strong and influential, though: do they feel inspired or intimidated by the constant reminders? 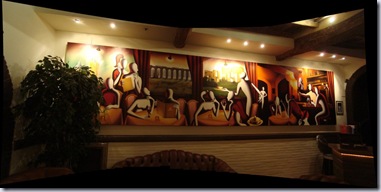 The food in Rome is absolutely outstanding at every turn.  From little corner spots where you get a fresh-cut slice of pizza to upscale venues filled with pictures of the owner posed with rich and famous visitors, every meal is adventure and delight.  I’m convinced that the Italians don’t send the best stuff out of the country: the wines and pastas are wonderful.  I asked for a recommendation of Grappa at a wine bar one night, and they pulled a 20-year old bottle out for us to try.  It was like velvet: a totally unique experience. 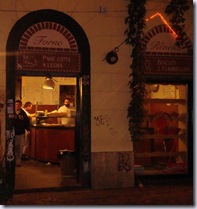 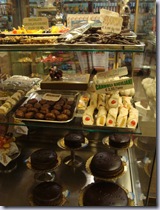 The flight back to Einhoven on Friday via Ryanair was packed with Italian students.  Every row, every seat, as though it were spring break.  It looked like a football or festival crowd, but I didn’t know of any events happening in the vicinity.  The Dutch border agents told me that this was the normal type and flow of tourists coming up for a party weekend in Amsterdam.  It’s the first time that I’d really encountered the ‘trade washing north: I understand why the Dutch city fathers are trying to think of practical ways to dampen it down.