The signs of a worsening economy are everywhere along the retail streets of Maastricht.  Post-christmas sales (Korting 30%) have now given way to much deeper clearance sales. 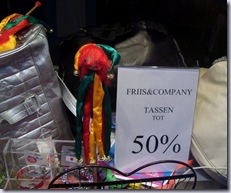 Still, times are flush and waiting lines of patrons stretch out into the cold winter streets at the Wafel shops across the town. 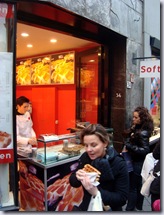 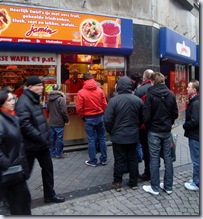 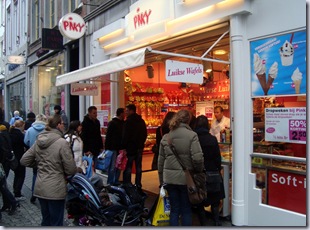 These are small storefronts that cook Belgian Waffles, adding with powdered sugar, fruit preserves, or chocolate and handing them out in white butcher paper. They cost about a euro for a big warm rectangle, and are the best thing going when I’m out to return a movie or pick up a few sundries before heading, with everyone else, back across the stone bridge late in the evening. 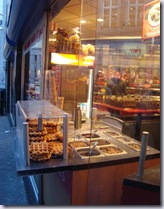 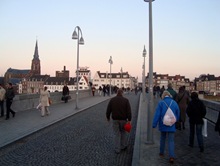 I love to play with new technology, exploring the capabilities and figuring out how it fits into my work and life.  The Eye-Fi memory card is a good example, an SD card for digital cameras with built-in WiFi.  It can upload pictures automatically to phones, computers, or internet albums, and can even imprint location-based information onto pictures based on triangulation against nearby base stations.  The iPhone has similar capability, and it’s spreading to point-and-shoot cameras.

I like the idea of having my pictures automatically tagged with the location of the shot.  I played with various mapping utilities that accompany Flickr, but it’s a lot of effort to position each photo on a map after spending time adjusting color and brightness, tagging them with titles and face identifiers, and organizing them into narrative albums.

More broadly, I like location-aware services.  My phone knows where I can find a shop or restaurant nearby;  TomTom keeps me on track, on time, and ahead of (most of) the speed cameras.  I might be interested in knowing what friends are nearby when I want a social evening at the pub.

All of these are great, but they all involve queries that I make based on geolocation.  When others can find me based on the same technology, I get concerned.  I don’t want advertising from stores aware that I’m walking past.  When Corporate Security assured me that they could follow me in real-time via my cell phone, I almost stopped carrying it.  I’m not sure that I want TomTom querying my navigation system to build up traffic congestion maps.

Matthew Honan wrote another cautionary tale in this month’s Wired Magazine.  He saw a woman taking a picture in a park in San Francisco with her iPhone and guessed that she might upload it to Flickr or Picasa.  Querying based on time and location, he found her pictures, and, based on her identity, could plot out a map of her geotagged uploads.  A characteristic cluster yielded pictures of her apartment, a short jump to address, identity, trouble.

At work, we struggle to find the right balance between out-of-sight convenience and breach-of-privacy intrusion during remote medical monitoring.  I suspect that consumer applications are taking more of an opt-in approach without users realizing the full consequences.  We’ll each have to decide whether we want our complete public trajectory to be publicly accessible; my kids say ‘Why not?’.  I’m not so sure.

I had meetings at the corporate HQ near Lausanne yesterday, a good chance to reconnect with the European folks after the visit to the US headquarters last week.  There really is a different style and attitude to the facility, mirroring the differences between US and European cultures.

The meetings ended early, leaving me with a few hours to drift before my departure.  Lake Geneva was tempting me for an adventure: a bit of mist lay over the water and fresh snow had fallen on the east-end mountains.  Why not?  The roads were clear and dry, traffic was light, and it turned out to be a lovely crisp day to take in the perspectives.  And it was a chance to swing through  Montreux, famous for skiing and jazz. 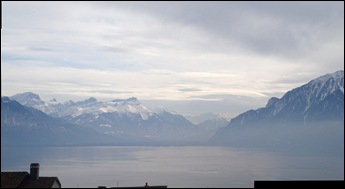 I hadn’t realized that the south rim of the lake was much more rural than the north side.  Evian is the only major city, surrounded by rolling farms along the hills and quiet little stone villages reflecting in the water.  Maybe it’s all just the French ownership of that shore that keeps it that way.

The stores are full of Nouveau Beaujolais (the young red wine from the last harvest), Emmental Swiss cheese, and thick pates.  The prices are ridiculously low by Dutch standards: Two bottles of wine, a kilo of cheese, and 500 kg of pate was 25 euro.

I hope that an early objective of President Obama’s administration is to rein in the Transportation Safety (oops, sorry: Security) Administration (TSA).

In the Bush years, the agency’s scope and the intrusiveness of airport procedures expanded year by year.  X-ray screenings and laptop inspections grew to include shoe removal and liquid restrictions. Threat levels were stubbornly stuck at Orange; no-fly lists proliferated.  No matter that there was no logical cause or proximate threat: somehow the absence of further incidents served to justify the effectiveness of the system.

This week’s learning was not to carry flour in my luggage.  Predictably, TSA opened it, coating everything in my bag.  I wrapped it in plastic and carried it for the rest of the trip, getting stopped for further inspections and the occasional fingertip tasting at every portal.

The other lesson was not to respond to the question “Are you carrying $10,000 or more with you?” by smiling and sighing I wish… . 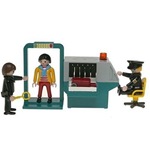 I’m concerned that, rather than reform, the effort is to rehabilitate the image in popular culture.  ABC’s new Homeland Security show is a scary example.  And then there’s the new PlayMobile Security Checkpoint playset, right.  I loved the commentary from Kiera Butler at Mother Jones:

I was a little disappointed when I first bought this item, because the functionality is limited. My 5 year old son pointed out that the passenger’s shoes cannot be removed. Then, we placed a deadly fingernail file underneath the passenger’s scarf, and neither the detector doorway nor the security wand picked it up. My son said "that’s the worst security ever!". But it turned out to be okay, because when the passenger got on the Playmobil B757 and tried to hijack it, she was mobbed by a couple of other heroic passengers, who only sustained minor injuries in the scuffle, which were treated at the Playmobil Hospital.

PS: While on the theme, here’s a link to a wonderful complaint letter to Richard Branson that brightened my day.

PPS: …and, completing the arc, here is my all-time favorite hotel complaint.

For a long time, my corporate nemesis was the gatekeeper and the auditor. While I recognize the need for rules and procedures, documentation and compliance, it’s never come naturally to me.  Too often, the tasks, and the people charged with ensuring my timely adherence, were simply barriers to creativity and progress.

As I’ve matured, my perspective improved because I’ve worked with some outstanding quality and regulatory people who were genuine partners in getting things done well.

But nothing can redeem the evil minion.

Once I’ve negotiated scope and resources with a project or department leader, a detail person is assigned to do the actual work.  The minion takes the assignment to acquire credit and assets, focused only on impressing their overlord.  This, in turn, is a huge frustration as the partnership turns asymmetric.

One minion asked me for detailed background on a scientific point related to our project.  I prepared the summary papers and worked with independent sources to get them reviewed. Later, I discovered that the report was passed on to their boss as their own work, without thanks or attribution.

Another asked me to prepare detailed background on a prior project that I’d been involved with, weeks of work finding and organizing archived source materials.  As it turned out, the departmental review only touched on about 10% of the work; the rest disappeared into the minion’s files in case they were asked questions.

Yet another kept my project hopelessly hung up in testing; every estimate of time to completion was missed, every week.  I discovered that the minion had recognized that his boss would hold me accountable for any failure, and so had adopted a strategy of telling his department head whatever schedule he wanted to hear.

When the game was revealed, my first thought used to be to take the minion to task, but this is both unsatisfying and counterproductive.  On special occasions, I’ve happily mentored the minion to self-destruction.  But generally I’ve found that it’s best to just write them off: politely stop feeding them and constructively replace them.

Reflecting on the experiences, I realize that most of the problems that I had with auditors and gatekeepers were likely also minion encounters; people playing their own “how high can you jump” game when their boss gave them an assignment.

And I can see where one particularly bad boss was actually a minion of a minion: the boss’s lack of confidence leading to jitters throughout their staff, stirring the entire minion anthill into frenzied subservience.

‘nice to be back off the road…it was a short trip but with a lot of stops.  The 16 hour trip back on the plane didn’t help, and there was an absolutely stationary queue of traffic waiting for me on the ring road around Eindhoven and south towards Maastricht.  I wish I had a way to gauge the length of these jams, but after spending an hour to make ten km progress, I angled off to Venlo to get around it. 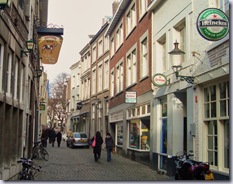 It’s nice to let go of a long trip with some simpler, grounded activity closer to home.  Maastricht is a wonderful city for walking, with lots of twisted old streets and big public squares.  I’m still discovering nooks and notches in my new town: today’s find was a traditional bakery still grinding it’s flour by water wheel.  There was also time for exploring St. Servaas church, dating back more than a thousand years. 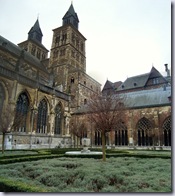 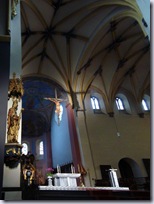 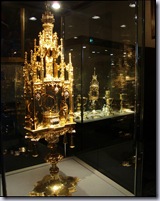 Traditional green, yellow, and red decorations have started to appear in anticipation of Carnival, still a month away at February 22-24.    Shops are selling masks and costumes, and floats are starting to take shape in scattered workshops.  This isn’t a celebration that I remember from Arnhem, but clearly one that will be a big event here in the South. 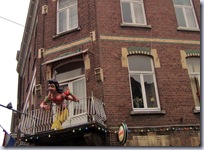