This weekend, the University of Cambridge is kicking off the celebration of it’s eight hundredth anniversary as an educational institution.  The signs are everywhere, and there will be a symphony of bells rung in colleges and churches across the city this evening. The administrative center of the University, Senate House, is being used as a screen for historical projections of famous scholars and discoveries through history.  (YouTube has views of the event) 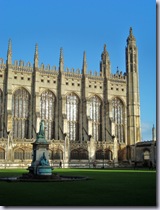 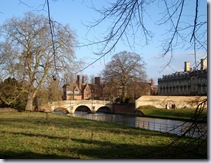 A new piece of public art has been erected in the city center, the Corpus Chronophage clock, radically different from all of the sundials that grace the college and academic buildings.  It has a golden face with rotating lights to tell the time: a red-eyed grasshopper forms the escarpment.  It’s fascinating to watch it move and flash, and there is a constant stream of tourists and photographers watching

800 years of unbroken continuity; what an amazing thing in this world.  It’s a longevity beyond the lifespan of trees and tortoises, literally inviting geological comparisons.  But, more than stone walls, the University is a living thing, scholars weaving the unbroken golden braid of knowledge and the fabric of culture and passing it down the centuries.  I always felt the close presence of the great scientists, philosophers, poets, and engineers during my stays here, and have become alert to the wider influence of the University’s graduates in public and industrial life.

For all of that, the University is a self-effacing community: people talk about their work more than than they do their achievements,  and are always a bit concerned about whether Cambridge is still relevant and competitive in today’s world.  I think the whole mix is stimulating and endearing: it will always be a touchstone.

And, if house prices drop enough, I know where I want to live… 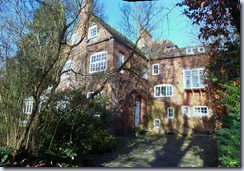