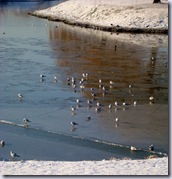 Flat chunks of ice have been floating down the river this morning.  I’m not sure whether they have broken off from ponds upstream, heralding a thaw, or formed overnight, anticipating a further freeze.  The snow has certainly lingered, icing the gables of the Old City and outlining the stones along the Wyck Bridge.

Commentators are predicting similarly chill winds (or thin ice) for the new president as he takes office in two weeks.  Festering problems with mortgage financing and health financing seem likely to top his in-box.  In both cases, there have been recent proposals that he look to Europe for answers.

The US mortgage crisis was caused by banks making high-risk loans to people with poor credit and income qualifications. They sold these loan on to brokers, who blended them into risk-stratified securities that could be sold on as low-risk, high-return investments.

The Economist recently suggested that the Danish model might be worth considering.  As in the US, banks loan money to homeowners, then send the mortgage to the secondary market.  However, in Denmark, the originating bank remains accountable for making good on the loan if the borrower defaults.  And the borrower has the option of buying his securitized mortgage off of the secondary market, in effect allowing him to take advantage of a fall in prices and further promoting liquidity in these securities.

The US health care system is employer financed, a significant burden on businesses (retiree benefits to auto workers, most famously).  It has also lead to a lack of insurance and access among the unemployed, soaring costs to the self-employed, and a lack of portability for the still-employed.

The New England Journal of Medicine suggests that the Netherlands’ experiment with health financing may be instructive.  All Dutch are required to have private insurance, paid for by direct employer subsidy or, for the unemployed, a parallel government subsidy.  Workers may spend the money to join health insurance pools of their choice, and the universal subsidy ensures that they remain enrolled as they move among jobs.  Subsidy levels may be adjusted to follow inflation or to try to control costs.