After a week of snow and ice and sub-zero (Celsius) temperatures, the wind picked up out of the south this morning, darkening the river with wavelets and scattering the gulls.  The snow icing the roofs melted in hours, sheeting water over the eaves.  The cobblestones emerged from their cloak of ice, and the streets became dry and firm. 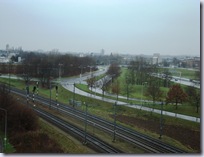 The walk upriver to the fitness center was a cardiac exercise in itself, as a warm stiff breeze pushed along the Ceramique and whistled through the new bridge.  By afternoon, the scene was almost springlike, green grass and leafy evergreens against the red brick walkways and apartments.

I’m worrying about the impact of the warming on the ice up north: the newspaper de Telegraaf had a wonderful pull-out section on the 11th celebrating the 100th anniversary of the Elfstedentocht this year.  It would be great to see a run.