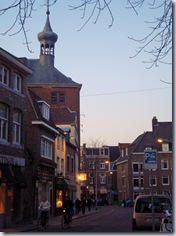 Its started snowing again: I think that the weather has actually gotten worse since I moved down from Arnhem.

Expatica recently reported that this has been the coldest winter since 1997, although the coldest temperature, –20.8 C  in Weert (Limburg) still seems warm at –5.4 F compared to what the upper Midwest has been experiencing.

The southern parts of the country have also received more snow, totaling 10 cm, than other regions of the Netherlands.  Happily, it’s also one of the sunniest Januaries on record as well.

February 1st, as planned, I pulled the trigger to start work on a new activity, sowing seeds that will hopefully blossom in the coming months. It should be both challenging and instructive, opening some new opportunities that I’ve been thinking about for a year.  And it will all remain a Dutch adventure, relevant to the themes of my essays here and breaking some new ground for me in the Netherlands.

I’ll look forward to sharing progress as my plans come together.