It’s a rainy day in Maastricht: time for sorting pictures and stories while watching the river lazily flow past.  A week ago, the scene was of Mons, Belgium, south of Brussels. 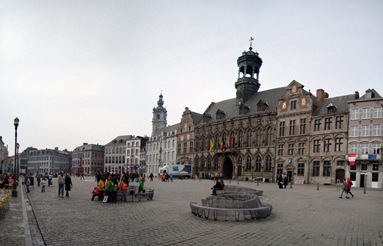 Mons is a fortified city of the Middle Ages with a lovely town square (the Grand Place) overlooked by an ornate city hall.  During our visit, there was a children’s party being held in the upstairs banquet hall of the building, which allowed us to follow the children up to inner rooms and balconies that probably aren’t open public spaces.  The vaulted brickwork, in particular, was striking, and it was fun to be on the terrace overlooking the square. 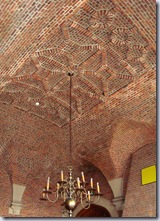 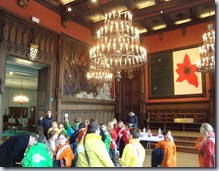 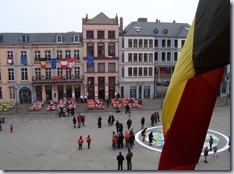 Outside the city hall is a small brass statue of a monkey: it’s said to bring good luck if you rub its head with your left hand (okay, so I did, science be damned: I can use it).  The origins of the statue are unknown: none of the city’s historical documents don’t refer to it and it seems to have just appeared one night. 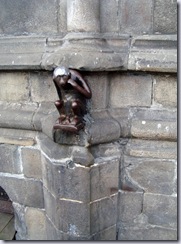 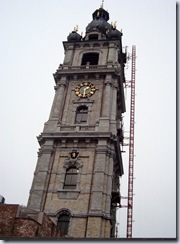 Nearby is the Belfry, a world heritage site currently being reconstructed. More ornate (and straighter) than the Belfry in Ghent, it has a cluster of turrets and spires above the clocks that accent the dark, twisting hill of the medieval streets leading up to it.

Mons has submitted a bid to be the Capital of European Culture in 2015: they’ve kicked off with a delegation of young people exhibiting their work in the town center.  Their theme will be “Mons, where technology meets culture” and their bid will feature symbolic works that link the town’s medieval past with it’s technologic future.  Their bid promises to “reduce the gap between baroque music and Google, Renaissance painting and Numediart, symbolist poetry and Microsoft”.  ‘should be fascinating to see how they do it. 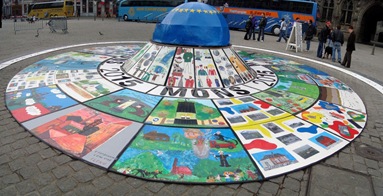