Leysin to Lugano by 1 pm.  4 hours by car, according to Google; TomTom concurs.  Sure, it’s a bit of an overland route through the Alps, but it’s the end of March and looked like good secondary roads all the way. 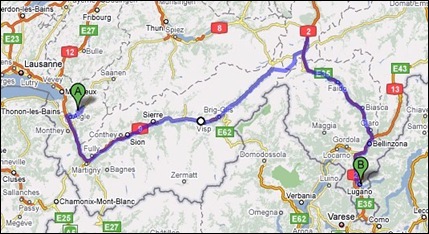 I woke to find a bit of fresh snow in Leysin, a small ski village above Montreaux.  Sixt had upgraded me to a 4×4, though, so I maneuvered easily down the mountain and eased into the eastbound motorway traffic.  The mountains were gorgeous in the morning light, the valley a crisp 8 degrees and clear.  I was listening to podcasts, idly reflecting on what makes a scene picturesque.

I concluded that it’s not just the image; there’s a temporal dimension about having something revealed, or the light come out, or things slide into proper arrangement, that’s difficult to convey in a photograph.

By ten, I was off the highway and headed through delightfully named Bitsch and Visp on the road to Brig.  The highway elevated, the snow reappeared, then deepened.  And deepened.  There were fewer and fewer cars and an amazing amount of snow, especially having come from Oklahoma only last weekend. 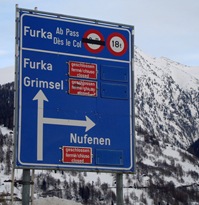 The signs for the passes were all looking an ominous red, but the roads weren’t closed, so I pressed onward, upward, trusting.  Until, at Obergestein, when TomTom pointed towards a route that was obviously snowed over, I finally pulled in to ask directions. 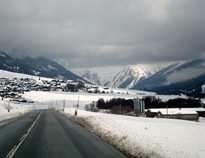 The nice fellow with the rivet through his lip directed me further along the road to Oberwald, where there’s an underground railway that can carry the car to Realp for 25 euro.  Swaying along through the pitch darkness, I was reminded of Frodo traveling through the Mines of Moria to escape the snowstorms above.

At Zurndorf, TomTom helpfully suggested that I turn right and go up over the  St. Gotthard pass, but, with only skiiers in sight along that road, I opted to dive down a twisting canyon towards Andermatt instead.  TomTom grumbled, displayed a terrifying set of hairpins,  and added 30 minutes to the trip time.  It could get no worse. 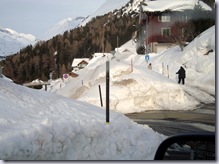 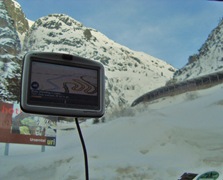 At the base of the twisting road, I then found myself at the entrance to the St. Gotthard Tunnel.  It was going to be my day for crawling beneath the Alps.  So, back underground for the 17-km trip to the south. Beyond, though, it was a nice downhill coast to Lugano, and I found spring waiting for me when I arrived at the lake.  Trees were in bloom, a gentle wind riffled the water, the snows were a reflection on distant peaks.  Amazing contrasts. 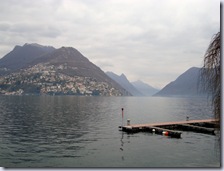 ‘Half an hour to spare, and the afternoon tests and meetings went excellently. As I got ready to head back to Leysin,  TomTom suggested that a leisurely trip south through Milan might be in order.  It takes an extra hour, but would be lowland and motorways the whole route.

Tempting, but I smiled, swung back towards the St. Gotthard pass, and took a leisurely and rewarding backtrack beneath the Alps at sunset instead.  No sense in missing springtime in the high country, or beneath it 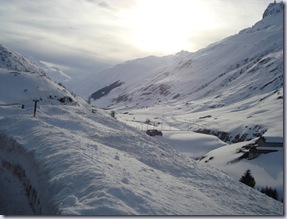 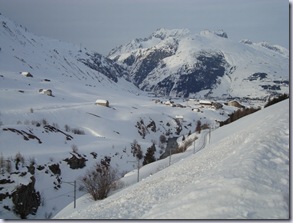