Thursday is Koninginnedag, the annual Queens Day holiday celebration throughout the Netherlands.  As expats quickly learn, it has little to do with the Queen’s Birthday (which is in January) and everything to do with a celebration of all things Oranje. The holiday began in 1885 as a day to celebrate national unity on the queen’s birthday, and took it’s present date in 1949 from Queen Wilhelmina’s birthday as a celebration of saamhorigheid (togetherness).

Today, although there are formal events, it’s mainly known for two things: the party and the street vendors.

The party starts at the stroke of midnight on the 29th as   koninginnenacht (Queens Night) is celebrated in bars and music clubs in the major cities. The day itself is celebrated with dancing and drinking, with the streets and canals of many cities (and Amsterdam in particular) filling with revelers.  There’s a huge ferris wheel near Dam Square, and music stages being set up around town.  I’m looking forward to seeing what it’s like in Maastricht, although it may be a more ‘northern’ celebration..

The day is also a tax holiday, and the Dutch take advantage by dragging their unwanted household goods to the curb and selling them as a huge garage sale.  I’ve always had the impression that it largely serves to rotate junk from one household to another.  Already, people were marking off their space with tape along the canals as I visited Amsterdam. 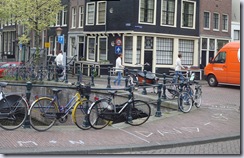 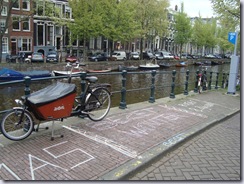 I Amsterdam, the local tourist organization, had a clever promotion planned for the event, involving photoshopped posters of celebrities.  Yes, Hillary on the left and Obama in the “Kiss me, I’m drunk” tee-shirt. Priceless.  After protests from the French, the posters have been removed from the website and largely taken down around town. 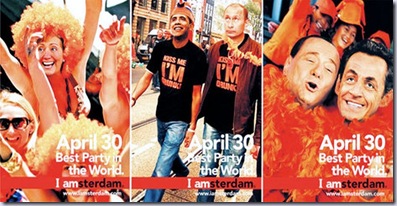 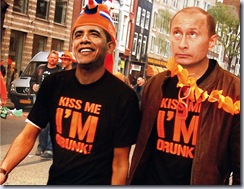 (Thanks to the “I am not a tourist” blog for pointing out the story; details of the campaign and the retraction were published in Parool, and the photo is theirs).