It’s finally turning cloudy and cooler in the southeast Swiss hills.  The weather has been brutally hot and sunny for the past few days, well above 30C, but the temperatures moderate agreeably and the breezes return each evening.  It’s been nice to sit out over a late meal and watch twilight fall across the valley below, keeping both my foot and my spirits elevated.

The aerie is near the border town of Morbio Superiore (superior death?), not too far from Lake Como and about 20 minutes from the hospital in Lugano.  This was my first ‘patient-perspective’ experience with heavy-duty European health care: Americans are parochial about the  technical superiority of their hospitals, and I admit that I approached my admission here with some misgivings.  However, things have gone exceptionally well, 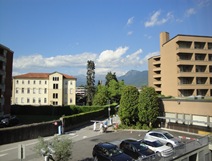 The Clinica Luganese is a private hospital in Lugano, one of several that serve specialty practices away from the larger public hospital.  The orthopedic wing is open and modern, perhaps half filled with a mix of European and foreign patients, and an active teaching practice alongside the clinics.  The parquet floors and abundant recessed lighting were modern and welcoming, and, although I took a semi-private room, I never had a roommate, so ended up with a lot of space and quiet.

As a medical device guy, I naturally watched the technology: there was little difference in structure or procedure from what I would find in a US hospital. The trip through prep, surgery, and recovery rooms matched similar facilities in Seattle, I don’t think that there are any special risks to having procedures done out of the country if you have confidence in the doctor and have previewed the facility.  Payment can be complicated, though;  more about that tomorrow.

The other nice aspect was the meals: although dietary restrictions were in place, the food was delightfully Tuscan-Italian styled.  Good breads and salads, pasta and coffee, were the norm, bottled water instead of tap.  Apparently ‘vino’ was also available for purchase, although I didn’t try it.  Days started early: vitals at 6 am, breakfast at 7.  Doctors made rounds in the evening rather than in the morning, and a music school up the block provided a nice backdrop of students practicing scales and pieces.

On the downside, fluency in English was rare: physicians do, but few others.  So, from staff to television, everything was Italian with a smattering of French. I asked a friend to come up for a few days to translate, assuring that I could engage with the process: I think that this is a vital thing to plan for.  While the staff was always smiling and helpful, there was a tendency to say “I’ll be right back” and then vanish: occasional assertiveness was needed.  And a lot of the formal paperwork is missing: I was surprised that I was encouraged to wander out the door without a doctor giving instructions and signing my discharge.

After leaving, it was my responsibility to get the post surgical meds, to secure local housing, and to arrange transportation.  Again, it’s best to plan all of this ahead: the local VVV gave good guidance on rentals, and the staff was able to write down the address for a nearby pharmacy open on Sunday.

As the debate on US healthcare policy cranks up, I’m sure that there will be a lot of debate about the merits and faults of Europe’s  models.  I didn’t have any issues with quality of care or patient care procedures, lack of technology or infrastructure.  There were far more similarities than differences; it was all much more familiar than I expected.