Preliminary test:  Imagine you are driving from Maastricht to Liege.  You pull up to the A2, confronted with this signage, how do you turn south? 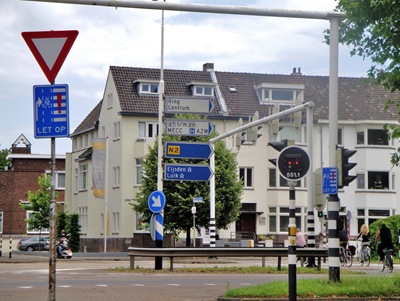 Among the many markers in this (true) picture are the route signs, lane marks, bike warnings, and bus signals.  It can be a real challenge the first month out.

can be deciphered by reference to the Road Traffic Signs and Regulations manual.   You’d find that the key sign in the highway intersection is this one, telling you that you can’t complete a right turn before yielding to all bicycles and pedestrians.  In practice, this precludes making right turns.

More confusing than signs, though, are the marks on the roadway itself.

Last week, Isabella at Touch of Dutch and I tried to sort out the meaning of serrated hash marks on the speed bumps Verkeersdrempel.  It led me to start taking note of the various street marks around, none documented in the Road Traffic Signs manual.

Herewith, a catalogue (Note: I am the passenger, not driving):

A typical Dutch country road: no marks whatsoever.  Like the British roads, it tends to be about one-and-a-half cars wide and lined with five-foot hedges, so it’s always difficult (for Americans) to navigate confidently.

A typical Dutch village street.  The lane for cars lies in the grey area between the hash lines; bicycles own the red zone at the edge.  Right turns on red are not allowed: bicycles own the intersections as well as the countryside.

A white-lined pedestrian crossing.  People on foot rank below both cars and bicycles for right of way; note that nobody is attempting to beat the van across the street 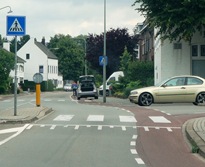 Serrated hash at a 4-way intersection.  No speed bump in sight, so Isabella and I are guessing that the mark means “Slow down and look”, without requiring a full stop.

The famous “shark-teeth” mark, telling you to yield to traffic on the main road.  The pointy bits aim towards the submissive driver. Also visible are diagonal marks that signify street narrowing.

This is a bit of a puzzle: it’s also a Yield sign, but I believe a line of squares requires a full stop in the side street before proceeding.

A zigzag that shortens, generally indicating a crossing zone or low-speed zone.

The bicyclists are, indeed, shown life-sized as  in the wild. 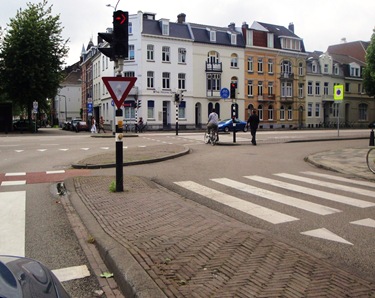 Extra Credit:  Dutch highway markings will be upgraded in the near future to improve  lane and speed control.  What are the new lane marks?