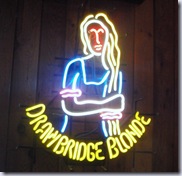 The past ten days have been filled with business and a little leisure, continuing progress with the foot and the company.  I’m in stormy Chicago for a couple of days, woken up by thunder, worn down with jet lag, so I’ve just settled in with coffee and a complimentary Internet connection.

It’s a good time for being philosophical about life’s travel challenges.  I arrived here a day late after getting caught in a massive traffic jam on the A2 at Utrecht on the way to Schiphol.  Normally, leaving Maastricht by 10 would leave plenty of time to make a 3:30 flight on a Saturday afternoon.  But an accident at Brukelen and a lack of highway exits trapped me in a 30 km queue for about two hours.

Things worked out fine: KLM rebooked me on the fly and I holed up overnight at the airport Ibis to catch the next flight to the US.  The plane was steerage seating, wedged against the galley, pinned by the reclining woman ahead, jostled by the nice Hungarian couple to my left. no movies or substantive meals. Nonetheless, it was a good chance to organize, catch up, and plan, more productive than watching The Watchmen.

I also spent some time catching up with the Continental papers, filched from the airline lounge, and full of indignant protests from European politicians about getting dragged into the US healthcare debate.

It seems off-track.  There should be no question that the US needs to figure out how to achieve universal coverage, stimulate outcome and productivity improvements, and bring costs under control. The Dutch or Swiss systems are good examples that make a lot of sense to me, embracing these principals within a private system of insurance that ensures access, choice, and universal coverage.  I’m also reading The Innovator’s Prescription, recommended by several friends, which takes a reasoned look at how the system might be reconfigured.

But the president seems lost in this debate, making effective reform increasingly unlikely.  The congressional plan sounds like a zero-sum game of shuffle-the-favors rather than real reform, and I understand the concerns of people who believe that they will lose.  But their Town-Hall tactics look deranged from this distance, and the debate has degenerated to embrace chimeral issues.  It’s too bad: there are good ideas and examples that should be heard above the “death panel” shouting. 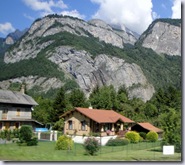 It reminds me that I need to get my Dutch health insurance sorted this week.  I’ll probably opt for the basic package of primary and emergency care with a rider for physiotherapy for the first year.

The Swiss surgeon was pleased with my progress during my two-month post-surgery visit last week.  The x-rays looked good and the bones had mended: the foot maintained it’s correct position and the muscles were functional.  I’m good to go back on full weight-bearing and start flexing and strengthening the ankle.

It’s great to be mobile on two feet again and off of the Euro-style crutches.  Cobblestone streets and international air travel are a real challenge with the sticks, and I was getting weary.  One low point came when as dozen Delta handlers watched me slowly work my luggage from customs to the bag recheck without offering any help. Another was when EasyJet insisted on inspecting the boot at the ticket counter because their risk-management rules don’t allow people to fly with a cast.

So, I’m happy to be back among the walking, albeit a bit stiffly.  It’s hard to tell which pulls and pains are serious and which ones I just need to work through.  But I’m starting back into some light exercise and stretching, with a goal to get back to a normal street cadence in a week or so.  Already, people are noticeably less prone to look at my feet when they meet me, which may be the best sign of improvement.

Okay, off to do some work.  It was a good stretch of the blog muscles too…I’ve missed the writing.