There’s a chill in the air and the leaves are starting to turn in the south-central Low Country. At first, the orange and red turned out to be just berry clusters among the leaves, but this morning there is a definite change in color along the trees beneath the High Bridge. Autumn (herfst) is not far off.

I was tempted to take along a coat to go cycling last night, but thought I’d be warmer once I got the blood pumping. Nope. The wind was cold and unrelenting from the south, and I had to turn the bike’s light on by 8 pm. I ended up further out than I thought I was, a fact I discovered while pausing on an A2 overpass to figure out which direction led back to Maastricht. The signs pointed back the way I’d come, 10 km, and the city’s highest buildings were barely visible among the trees along the horizon. A flat tire would strand me hours from the apartment. ‘probably time to start taking a kaart as well as a jasje.

Queueing up: The brick-red bike lanes are narrow, and everyone stacks up one-behind-the-other at traffic lights and rail crossings. When the signal is given to proceed, people stay in order like the start to a NASCAR race. Nobody jumps the queue to pass until they’ve ridden a block and everyone is up to speed. Even if the lead rider is slow off the mark, checking both ways to see if another train is coming, everyone else stands. And waits. Until. He goes.

There is also a trick to the box of red bike lanes around major intersections. Unless otherwise marked, bike lanes are one-way running in the same direction as traffic, so you always use the lane along the right side of the road. At major intersection, I stopped to turn left when I came to the cross street, but there was no pole-and-button to activate the crossing, and crossing lights only allowed the riders coming towards me while remaining stubbornly red for me. It dawned on me that a short left turn would put me on the wrong side of the street and in the oncoming bike traffic. Instead, I have to cross the street then turn left to remain on the right side of the road when I’m done. It’s time consuming and counterintuitive, but I suppose it makes logical (Dutch) sense. 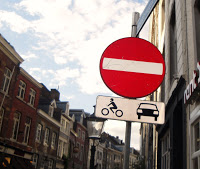 Passing through: I approached an underpass to get to the recycling bins and was confronted with the Do Not Enter combination shown to the right. Since I knew that cars could not enter, and the sign had a picture of a car and a bike below the red circle, bikes also could not enter? But bikes can go anywhere that’s not a pedestrian-only area. I was about to take my chances, but then a parking warden motored in on a scooter. Guiltily changing plans, I deftly turned into the curb and crashed everything onto the median.

The warden was nice enough to stop and help me up, get things untangled from the wheel, and set me on my way. During this operation, four bikes and a scooter passed the Do Not Enter and whooshed on down the road. I don’t understand the signage yet (nor the meaning of red-ring signs around bicycles), but I do need to learn to be more decisive and to take a bit off Dutch courage at intersections and crossings.