Since I left BigCo, I have been downsizing my carbon footprints in lots of ways. I chucked the car, bought a bike, ride the train, and, now, I’m doing the microHotel . Really, how much do you need when you check in?

citizenM is a new hotel that opened adjacent to Schiphol. I had an early flight and the Ibis had no specials, so when Bookings.com coughed this up as an alternative, I decided to give it a try. The train ride up from Maastricht took longer than usual: Sunday track-work forced me to ride the snelbus from Weert to Eindhoven. An oxymoron if ever…the bus is absolutely never more than pokey. So, it was sunset when I popped up from the basement recesses of the Schiphol station, blinking at the bright orange signage and following the walkway around past the rental cars. The Sheraton glistened seductively in the Dutch light, but I was not to be lured (not for over 200 euro a night, anyway). I’d seen the modules of the microHotel being lifted into place over the past year, and expected capsule-rooms with mattress-mats along the base that I could sit in but not stand. The brochure promised free wifi and mood lighting it would be a good giggle if nothing else.

I was actually pleasantly surprised. It’s a very plastic, themed hotel that is, nonetheless, very stylish, comfortable, and friendly. It feels a bit like an upscale hostel in the public areas: there’s a commons-area grocery and bar that attracts lots of people to the worktables and snacks all day, and the naturally gregarious (and young) traveling crowd fills the place for (relatively) cheap beer as the night goes on. The loners (mostly older) gravitate towards te free computers; everyone ignores the television. A good sign. 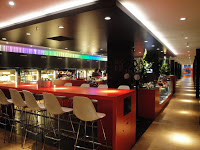 The room is a bit of a space-cabin, about as big as a small bedroom, a quarter of it is filled wall to wall by a bedshelf against the window. It’s huge when you get in, like an acre of windowseat. There’s no discernable workspace, so you end up sprawling things over the bed like you are working on the floor. The bathroom arrangements are…innovative. There are two glass cylinders, one for the toilet and one for the shower, capped by constantly shifting mood lighting. I never could find the trick to just having dim, shifting hues to provide a Northern-lights backdrop to the evening, but it’s kind of cool. And that’s it: it’s sleek and functional, modern and more than comfortable. And what do you really need in a hotel room anyway? (right, a view with more than a runway… ) 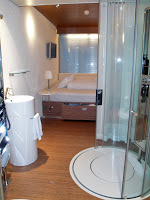 The disappointment was the mood-pad, the electronic command center that keeps the room rolling. Mine couldn’t find it’s connection to the room, rebooted when I held it, refused to sip electricity from its charger, and generally misbehaved . The (lovely) staff and the (condescending) IT guy fiddled with the box and the connections, resetting the box and then rebooting (honestly!) the room. All that happened was that my keycard got inactivated. It’s a pity: the thing looks fun. The whole room is branded Philips and it should be a showcase for their consumer technology. Instead, I end up thinking that Philips hasn’t quite got it all figured out yet. The folks in the bar tell me that they just request the manual control up front each time they arrive.

A good night’s sleep, a short stroll to the airport in the morning, prices lower than the Ibis. ‘just see past the ubiquitous theme branding (worth a case study all by itself), and it works better than the traditional hotel.