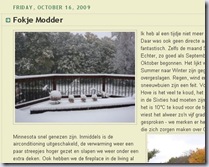 I follow a couple of dozen feeds and blogs, connecting out to a range of interests and opinions.  Most are fellow expats in the Netherlands, whose insights and advice are always helpful.  Less commonly, I follow Dutch friends who have relocated to the US.

One friend who I faithfully (and very enjoyably) read is a former work colleague who moved to Minnesota.  He posts weekly updates in Dutch about his life in the Big North (where its already snowing).  It’s helpful to me to translate his writings, and its been fun to follow his adventures and observations.

Lately, though, I’ve noticed more and more (unintentional) role reversal in the topics and events that we both write about.  We both scribble about the weather, getting around town, seeing the doctor, and views from our windows.  But while I post a picture of my Locomotief, he posts one of the Audi; I show the apartment’s balcony, he captures his house’s deck.

It’s a bit spooky, beyond simply bringing home the many contrasts between Dutch and American life.  As we each settle fully into our respective environments, I’m finding that my written life becoming more Dutch as his becomes more American.  It’s an intriguing and consistent swap.

I doubt that he considers himself less dutch and I don’t see myself as less american.  But the superficial lifestyles certainly evolve that way.

It reminds me, again, how much we are shaped by the tools at hand and the culture around us; the many ways that our local society defines how we live our everyday lives.