‘Completed the hop across the Atlantic: a long, long trip with a six-hour layover in the middle, but that’s the price of a cheap ticket these days.  It ended up causing a lot of ricochet jet-lag: I slept 12  hours the first night. ’never good to start a day after 1 pm.

The traditional decorations are out at Amsterdam’s airport, always a welcome sight.  Schiphol remains one of my favorite airports, 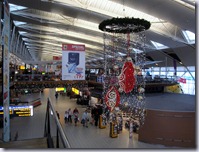 and their Christmas lights are among the best.

The airplane movie selection confirmed my impression that there hasn’t been much to see in the Bioscoop the past few months.  There were continuing series (Harry Potter, Star Trek), loud action films (Terminator Salvation, GI Joe), or both (Fast and Furious), but no good comedies or dramas.  Adam looks interesting for the trip back; most people around me were watching Ice Age or playing Solitaire.  I ended up spending a little time with House and catching up with 30 Rock when not reading or dozing. 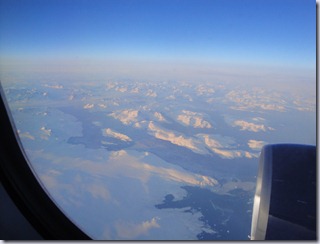 The scenery over Greenland at sunset was amazing.  There are mountain ranges along the eastern side by the sea, with deep glacial valleys and rugged peaks that glow in the flat light.  The ice sheet is said to be thinning quickly, but the vistas were seamless this evening.

In contrast, Minneapolis was warm and dry.  Friends have been posting pictures of snow in their back yards for months, so I was expecting the worst.  But when I met a colleague and left the airport, it was pleasantly moderate.  The Mall of America was quiet and undecorated, but  apparently the expectations are high for a return to a more normal shopping season.  ‘hard to believe the recession is over, though: just an inflating stock market that makes it feel that way.

And, of course, Seattle was dark, cold, and rainy.  I’ve always maintained that the Netherlands and the Pacific Northwest move in lockstep when it comes to the weather.

email
« How do you visit a new city?
Piling higher and deeper »
Radar Weather