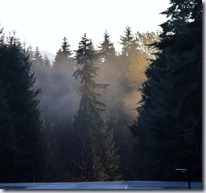 Four hours sleep last night…hope that the trend is towards damped oscillation converging to 7 hours.  ‘hope it happens by tomorrow, too.

It was a good excuse to get up early and re-partner with the Mobile Command Center, my Sony laptop, now restored to full function with a repaired case and new hard drive.  The new Windows 7 disks arrived as well, so I did the install and upgrade of all the drivers before installing anything else.

It took hours, but I generally like the new system.  It looks great, runs well, seems stable.  The only complaint is that everything has been moved around yet again: it took forever to find where networking settings have been hidden.

I’ve been making the usual rounds to dentist, haircut, grocery, drugstore to re-provision before heading back in the Netherlands.  I got an evening to explore a new single-malt with a good friend, both of us catching up with events, plans and a few tall tales.  Its still remarkable how much life diverges between travelers and settlers. We both admit that there are elements of the other’s life that we miss.

Of course, journeying means that the maintenance work (and not just the leaves) pile up during an absence. A lot has been done, and the general upkeep is looking pretty good. Still, cars needed attention, computers were offline, the television was only semi-working, furniture needed to be moved, the yard needed attention.

The day’s work is enough to clear my head about the romance of being a settler.  Talk is starting to turn towards downsizing, perhaps long overdue, but it gives a focus for prioritizing maintenance and throwing things out.

At least I seem to have kept enough upper-body strength from months on crutches to battle the leaf piles successfully.

And the leaves are beautiful this year: it reminds me of a Wolf Kahn pastel (one of my favorite artists).