Halloween celebrations are  uncommon in Europe, so it was nice to find two little candies tucked into the hotel room in Bergamo.  It was an omen: later, the town square filled with little trick-or-treaters running between shops in the early evening, followed by teenagers with fireworks around midnight.

It reminded me of the many windy, dark, rainy nights that friends and I laughed and told stories while guiding the kids house to house.  It was always a nice ritual, followed by warm drinks and candy-counting back at the house.

Americans tend to put a lot of effort into Halloween costumes, but there wasn’t much creativity in evidence in Bergamo.  Green facepaint and pink ballet skirts were the norm, not nearly the political and cultural commentary that I see at Carnivale.

Utrecht is adopting a new style of bus that I like a lot.  These shuttle passengers between the Centraal Station and the Airport (still, an appalling 4-zone hit to my Strippenkart!).  They are fast and comfortable with a dash of style.  I only wish that the NS rail system would adopt something similar.

I got blocked by a snelbus diversion due to track maintenance again this weekend.   They’re just terrible, everyone leaving the train to drag luggage through the stations, upstairs and down, then out through the rain.  We queue up at lines of waiting busses like refugees escaping darkened wartime cities. Smiling ouders in yellow jackets redistribute passenger loads; politieagenten block streets to let the column of busses glide through intersections. It adds an hour to the Eindhoven / Maastricht travel time, just at the time when I’m already tired and cold.

Every country has it’s minority of rude drivers, aggressors that speed in from behind, flashing lights, hugging bumpers if I don’t get out of their lane fast enough.

My observation is that the species prefers Audis, even though legend says that they favor BMWs and Mercedes.  This level of stress can’t be good for anyone, whatever the make of car they’ve earned.  Hard to tell whether the response to stress will make them an evolutionary cul-de-sac or the next dominant species…

And, yes, this one loved having me take a picture. 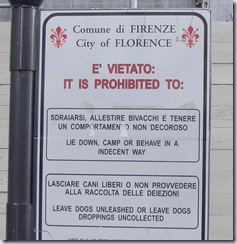 …and indecency is still not permitted in Florence, whether standing or sitting.