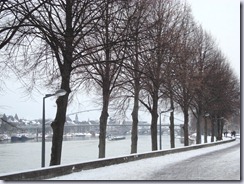 The Economist had an interesting article about living as a foreigner that concluded:

"The funny thing is, with the passage of time, something does happen to long-term foreigners which makes them more like real exiles, and they do not like it at all. The homeland which they left behind changes. The culture, the politics and their old friends all change, die, forget them. They come to feel that they are foreigners even when visiting “home”.

"Beware, then, however well you carry it off, however much you enjoy it, there is a dangerous undertow to being a foreigner, even a genteel foreigner. Somewhere at the back of it all lurks homesickness, which metastasises over time into its incurable variant, nostalgia. And nostalgia has much in common with the Freudian idea of melancholia—a continuing, debilitating sense of loss, somewhere within which lies anger at the thing lost. It is not the possibility of returning home which feeds nostalgia, but the impossibility of it. "

True, false, somewhere in between?

The conventional wisdom among friends in the US was that five years was the threshold.  I’ve known folks who hit these rocks in less than a year, others that remain connected and content for decades.

For myself (approaching five years), I have kept my connections with close friends and colleagues; I still feel more like an expat than an emmigrant or exile.  But the article did give me lots to think about, and it echoes the broader academic literature on expat experiences.

email
« Why is it…
Sliding across England (not) »
Radar Weather