There’s about 10 cm of snow in friend’s backyards, and the wind off the river is whipping up little drifts along the walls.  Temperatures are still fairly mild, only a couple of degrees C below freezing, but there’s a layer of snow over ice that makes things treacherous.

Although they’ve started skating up north, the river remains ice-free here.  Locals say that the “10 below for 10 days” rule only holds if there’s no snow.  Instead, we get about an inch each night.  The papers are full of stories of snarled roads and blocked railway lines; all of the evening trains down from Eindhoven were delayed 25 minutes by problems up north. Still, everyday life isn’t much different here in town. 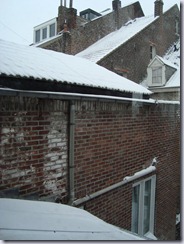 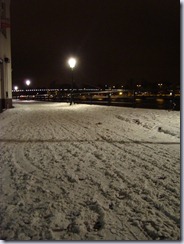 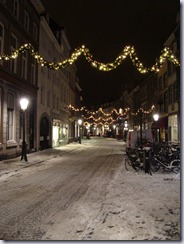 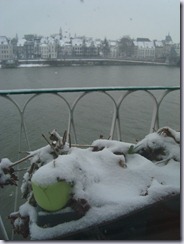 email
« Risk and confidence
Why is it… »
Radar Weather