The itinerary is straightforward, taking less than a printed page.  Board in Seattle, scoot north to Vancouver on the local Jazz commuter (a subsidiary of Air Canada, if you were wondering).  A break, then Lufthansa for 9 hours to Frankfurt.  Another break, then a CityHopper to Brussels.  An express train to Maastricht on New Year’s Eve, arriving in time for dinner and fireworks.

Seattle.  Last chance to buy American souvenirs before boarding the little cigar to Canada.  Security is less fearsome than expected. 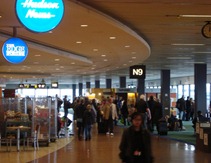 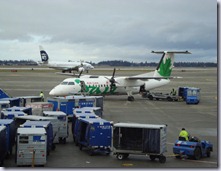 Vancouver: a picturesque airport, steeped with Northwest Eskimo art and faux-salmon streams.  Lots of Olympic souvenirs already displayed; the Delta lounge refuses me admittance because I’ve defected to Lufthansa. I settle for a last ‘burger and root beer by the aquarium and plan revenge. 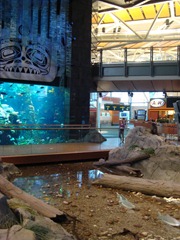 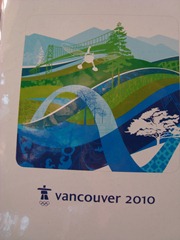 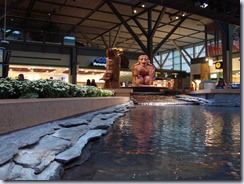 Nine hours to Frankfurt.  The lights are off but nobody sleeps; the discount flight is filled with children under 6 and much more luggage than I thought could be carried through security. I read my psychology book and watch second-run movies.  Twice.

Upon landing, we’re greeted by a gigantic coffee ad featuring an idyllic couple in the throes of espresso-ecstasy.  I’m feeling Home (it looks like Rome). 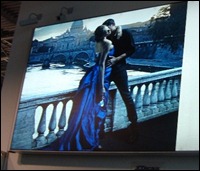 Frankfurt airport’s connecting trains are empty and the concourse echoes to only my feet.  I’m welcome in the deserted lounge; No champagne, so I settle for bubbly German beer and unidentifiable fried balls with mustard.  ‘making notes to see “Up in the Air” soon.

Another short hop, and things start to detail at Belgium (unexpected?).

Both pieces of luggage fail to appear in Brussels.  The express train suffers breakdowns all the way to Liege, one hour turning into three.  The crew gives up completely at Vise, only one stop short of Maastricht.  Everyone is put out into the rain: most of the crowd is teenage boys getting a jump on the evening’s drinking.  The railway promises a replacement train in 45 minutes.  I’m feelin’ like a refugee… 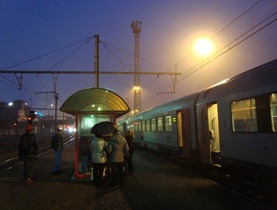 Arrive in Maastricht at 9 pm.  Head to town center to find dinner, but most things have closed early. Four teenage boys ask me if I know where to find prostitutes and whether they are any good.  ‘not good; I hope it’s just the jet lag making me look haggard and desperate. 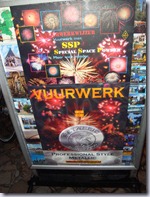 However, fireworks are still for sale and the bridges fill at midnight for a wonderful display; the snow starts to fall as the new year begins.  I last for half an hour then collapse into bed despite the noise…happy new year, all… 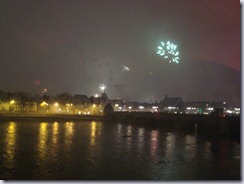