I was expecting the worst during my trip to England: we’ve been seeing pictures of deep snow, snarled traffic, and sub-freezing temperatures all month.  With a decimeter of snow on the ground in Maastricht, things promised to be bad across the Channel.  I packed gloves, coats, heavy sweaters, and layers of sweatshirts and headed for the NorfolkLine Ferry.

It actually hasn’t been nearly as difficult as I expected.  The fields are full of snow but the highways are clear and temperatures have been warm enough to keep the ice off the roads.  The intermittent snow changed to steady rain on the second day, melting much of the snow in cities and villages.  People are driving sensibly and the weather people are not predicting any big change in the weather over the next few days. 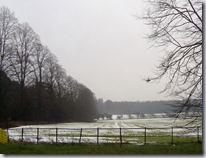 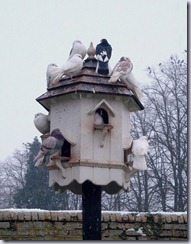 The birds are suffering during the cold, huddled on perches outside of their birdhouses.  ‘Being smarter than the average pigeon, I’ve found a nice manor house with rooms at reasonable rates to hole up in while I finish preparing lectures and catch up on background reading.

Unfortunately, Internet connections are few and slow, so it’s going to be an intermittent week.

email
« How long can you stay an expat?
My favorite pub notice »
Radar Weather