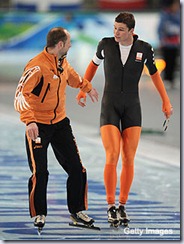 I’ve been enjoying the Dutch Olympic coverage on Nederland 1 this week; they do a pretty good job of sticking with events and summarizing results, although the commercial breaks feel long and repetitive.   In Seattle, I used to watch the Canadian coverage because they focused more on events than on manufactured backstory; I like that in the local coverage as well.

The ski-jumping was good, the ice-dancing finally seems to be maturing, I’m holding my breath against someone sustaining a really serious injury in the aerials, and I always enjoy the women’s curling.

A friend suggested that it’s a sure sign of old age when you start thinking the women’s curlers are cuter than the downhill skiers.  But, in my defense, there is the video by the Swedish women’s curling team to consider.

But most of the tweets and e-mails back and forth with folks in the US have been about Sven Kramer.

There was a lot of interest in his early, record-breaking speed skating win in the 5000m race, in his six-foot-plus height, and in his infamous interview with a US reporter (“Are you stupid?”), which got a lot of play on YouTube (now removed at the request of  the IOC).   Supplemental to that last story, I send my personal thanks to the Guardian for asking whether we should be debating the ignorance of American TV reporters or the rudeness of Dutch speed skaters (and for noting that it’s a question of postmodern philosophy).

But my lines really lit up after Sven’s disqualification in the 10000m race.   It was heartbreaking to see: the coach absolutely and immediately realized his mistake and what it meant, and it was a tragedy for Kramer.I’m glad that Kramer was able to be gracious about it in the end, but the conversations between the two of them afterwards must have been terrible for both.  A bicycling coach blogged a good perspective on it, but I still would have found it unforgivable on a professional level.

“How is this possible!" was De Telegraaf’s headline.

“I wanted to coach him too perfectly,” offered the coach.

email
« Just Be….
Whitecaps on the Maas »
Radar Weather