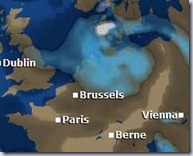 A major storm blew through Western Europe today.  The teeth of it passed south of us through northern France and Germany, but I think the ‘eye’ drifted northeast pretty close to us.

We’ve had absolutely howling winds here all day today.  Windows blew out in the Crown Plaza hotel a block up the river and roof tiles litter the bikeway along the river.  The wind made biking upwind all but impossible, I had to walk mine along the river in the early afternoon, dodging branches and cafe chairs.  Whitecaps made a rare appearance on the Maas river, adding a bit of spray along the footpath. 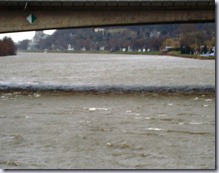 Even this evening, the wind is still whistling through cracks around the window frames and rumbling along the roof.  It reminds me of when Windstorm Kyrill hit Arnhem in January 2007: I was in my office, oblivious to the increasingly frantic e-mails in Dutch as they evacuated the building ahead of the storm.  Eventually a colleague filled me in and I ended up stuck in traffic through the worst of it.  Peak winds were later reported to be over 100 km/hr.

Researchers are arguing whether we are seeing a cyclic or secular trend towards stronger windstorms passing through Europe.  MunichRe, for one, warns that the probability of severe windstorms in Europe is increasing, with event rates dropping well below the historic ten year intervals.