Last fall, my landlord, a lovely 87-year-old matriarch, told me that it was time for me to leave.

No problem with my behaviour, but she was worried that she might need a full-time caregiver some day and wanted the space where I was living.  She offered a straight swap to the apartment upstairs, but it was dark and not as appealing.  So, time to move on.

Moving is never an easy task.  First, when I’m happy where I am, it’ hard to imagine what I want in a new place.  More river, less city, something bigger, or  more modern?  The first temptation is to say “the same, only better, for less.”  The fear is “trading down at the same price.”

The next problem is “What can I afford"?”  I know my budget, but if I have to buy furniture or a car, then that comes from the same pot, driving down what I can spend on an apartment.  Realtors, unbelievably, get a month or so of rent as commission in Maastricht, so there’s another overhead of 1-2K.  Then there’s the security deposit (one month for unfurnished, three for furnished).  Extras for parking, utilities, homeowner dues, cleaning, can often total a few hundred more month. 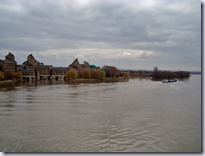 And where to live?  I like Maastricht, but maybe I can get more for less outside of the city.  The villages offer deals, but there’s an expat rule of thumb that says the further you are from the city center, the less cosmopolitan the populace becomes (tending towards provincial and suspicious at the village level).  The countryside can be very isolating.

And for how long?  Is this a ‘bridge’ residence until the business is established, the income flows, and I settle down?  Or, if things crash by summer, can I move out and move along?  I have the added “Two foot” problem of spending half my time in the Netherlands, a quarter in the UK, and a quarter on the road each month.  Does a Dutch residence make sense, Cambridge one, or both?  Maybe a bigger place here, a room there, a pied a terre one place, a two-bedroom in the other?

I’ve developed another rule against living in the same building as the landlord; there tend to be lots more interactions about noise, friends, and lifestyle than I want (even though I’m quiet, avoid throwing parties, and am, well, boring).

At the point where I’m considering moving a little, maybe I should move a lot.  If Valkenberg is on the radar, then why not Vucht, or the Vecht?

And if rent will be 1500 per month, maybe I should consider buying?  But will I be here that long?  Do I need permanent residency first (a year away)?

And if the deals are all across the river in Belgium, can I live there without having to register in yet another country?

In the end, it takes a long think and a deep sigh to pick up and move along…but, in best corporate fashion, I’m recasting my problems as opportunities.