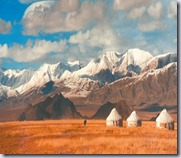 “In Ulan Batur stories are told of the old days of central planning by people bewildered that they had once been part of it.  In offices and workplaces comrades were required to keep a diary of what they planned to achieve each year.  Supervisors would check the diaries religiously to insure that they were in line with the Party’s Five Year Plans.

“After a time, the planning diaries became quarterly.  Managers liked them because they were something tangible that could be managed without leaving their desks.  Workers liked them because they could crib from each others plans, and they were a happy substitute for work.  The plans were becoming addictive.  Soon detailed written plans had to be submitted every month.  Then weekly plans were added to the regime and finally, with workplaces now in the full grip of planning mania, the plans became part of the daily routine.

“From receptionists to supervisors, workers spent a couple of hours a day on the planning diaries, ensuring that they had the right revivalist tone and that they were in keeping with the resolutions of the latest Party Congress.  As well as work plans, there were ideological plans with workers planning which books to study and which Party reports to read, and general plans like New Year’s Resolutions in which comrades planned to work harder and achieve more.

“The plans became everything.  They flowed back and forth on tides of paper.  An entire level of management as devoted to reading and checking the plans, advising amendments and suggesting future goals.  It was an Orwellian world in which the plans had become the chief industry. Implementation was considered a dangerous and intractable business, with its thread of failure and culpability.  It also took time away from planning.  Everyone in the system, from office juniors to under-secretaries, recognized that they had a vested interest in the plans and that the thing could be easily upset by a rogue zealot who wanted to take action.  Such people were quickly squeezed out.

“Nothing so illustrates the enfeeblement of the country as this demented planning.  In trying to adopt to the ways of a modern bureaucratic society Mongolians had made a fetish of one element.  In Ulan Batur a race of hardy nomads, a swashbuckling people who swept across the face of Eurasia conquering all of the great civilizations of its age, had been reduced to a city of compulsive penpushers and timid functionaries.

“The plans are gone but the dead hand of seventy years of Communist rule still lingers.  The lack of initiative, the sloth , the unwillingness to take any action however innocuous in case it exposes you to criticism, will remain part of the mentality of urban Mongolia for years to come.”