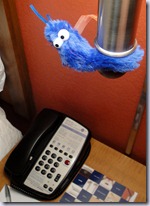 (Het is allemaal over Bessie)

It started out fairly innocently.

‘just a new promotion at my local AH grocer, supporting the Dutch team at the World Cup (Hup!).  The little furry beesie was kind of cute in a way…I got one for every 15 euros I spent on groceries, and collected all four colors in a couple of days.    They curl around lamps and chair backs, and were a nice accent around the apartment for the party last week.

But they’ve taken on a life of their own.

No bag of groceries is safe, and beesie started to metastasize across my apartment, colonizing every rail, pole, and rung.  The big BESSIE-BOA was next: A gift for my daughter, but clearly queen of the brood once she moved in.

Soon, the trouble became reminiscent of … 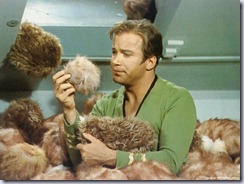 Of course, they have a Facebook group, they are on LinkedIn, they want my personal information (only Basic and Profile, nothing more, promise…) 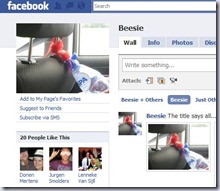 At least they’re not on Wikipedia.  Yet.

Utrecht’s Flamingo points to a Flickr group devoted to people’s Bessie photos.  I threatened Invader Stu that I would see to it that two new colors were released and the promotion extended if he didn’t return summer to the Netherlands.  I don’t think he’ll cave, unfortunately (sorry, Holland, I tried…). 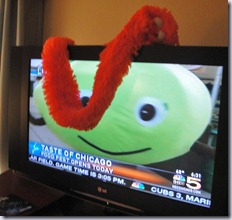 I have taken to stuffing them into my suitcase to give to friends and family when I travel.  This is akin to spreading disease via long-haul flights.  The BOA, in particular, seems to have found her best friend in my hotel room this morning.

email
« Having presence
Pitching through the week »
Radar Weather