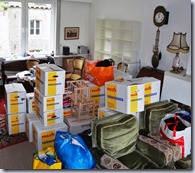 Of course, it rained…

The big (and, for the moment, the last) move is complete.  Everything got packed up over the weekend, probably 30 boxes overall in a tidy pile in the middle of the living room.   About a third books, about a third clothes, the rest assorted kitchen, office, linens, and knick-knacks.  Lots of interesting tidbits turned up during the packing and sorting; lots of outdated paper went to the recycle bins.  The job of separating my minutia from the landlord’s is largely done: I hate counting spoons and towels against the inventory list from three years ago.

And then it was done.  I always feel like I’m moving phases in life when I move apartment, even though this one isn’t associated with any particular job or life change.  Still, I took the last of a good Cragganmore out on the balcony to toast the future.

Monday was dim with misty rain, everything was staged in the vestibule while friends brought cars and muscle around.  Loading and vacating was easy; all of the problems turned out to be at the  new end.

The stairway up to the new apartment enters through an empty store that the landlord is trying to rent, he’d promised to move the stairs around to a street entrance during the past month. 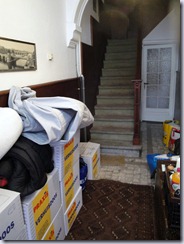 Work started, then stopped, and now there was construction blocking the stairwell, trash at the top, graffiti on the windows.  The realtor said that their person responsible had gone on vacation, failed to delegate, the landlord had heart surgery.  And so we began by sitting down to have a very close, very serious conversation about taking responsibility when long with the month’s rent as their fee.

I think it had an impact: workers appeared this morning and have been busy on the stairwell, the electrical and gas pipes, and the wallboard.

The apartment itself lies at the top of a towering cliff of stairway: vertical, narrow, and twisting in the true Dutch style.  It was a real challenge getting the books and furniture up the trail, but the pile at the top of the stair grew to match the one emptied out from the old place.  We were done before sunset, everyone  had a quick drink to toast the new place 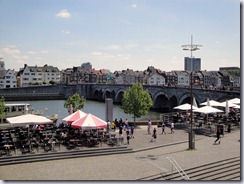 Now to the challenge of unpacking and nesting, but so far, it’s all looking very good.  Here’s the first view of the namesake Stone Bridge from the new windows.