Now that I have a footprint in both the UK and the Netherlands, I have to get between them each month.  One alternative is to take the Eindhoven – Stansted RyanAir flight: air fare, train at either end, and the bus connections usually add up to a six hour trip and over 100 euro cost.  For about the same time and fare  (two hours longer) I can drive to northwest France and take one of the cross-channel ferries.  I’ve previously written about the Norfolkline from Dunkerque and  the P&O ferry from Calais.  This time, there was a special on the third major line, SeaFrance, also leaving from Calais.

Aside:  Once I pass through the passport check, I pull into a  line for boarding.  Customs agents then search the car for people hidden inside.  It seems to me that if the hidden person simply got out of the car and joined the passengers once past the customs check, nobody would be the wiser?

SeaFrance is usually the most expensive of the three alternatives; their sleek, covered boats and faster crossing times made me think that they were a premium service.  So I was really looking forward to giving them a try, expecting gleaming brass, polished wood, gourmet food, and expansive duty-free shopping.

If anything, SeaFrance was at the opposite end of the spectrum.  The lounge areas were outfitted nicely and I could bring my own food (the other lines limit lounge eating to food purchased on-board), but the area was ill-kept and the windows small and dark.  The duty free was similarly limited, with less selection and a tumbled-together ambience.   Food was limited to a small selection of fried goodies on steam tables.  Outside, deck chairs were only present on top of the boat.  People were allowed car access throughout the voyage, so there was a lot of milling around, rather than the usual pastimes of reading, eating, watching birds and boats, and guessing the nationalities of fellow-passengers. 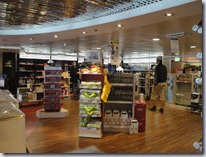 So, after trying all three, SeaFrance gets my third-choice nod, Norfolkline as the economic alternative a cut above it, and P&O having the overall best ambience and amenities.  I haven’t tried the overnight ferries from Hoek van Holland yet; that will wait for a trip to Yorkshire.

Finally, remember that its better to book ahead, always have a printout of your reservation when you check-in, arrive at least 45 minutes ahead of the sailing time, and search for deals at aFerry when you make a booking.

Disclaimer: I make my own choices, buy my own tickets, and have not written this review at anyone’s request.

email
« Which is more important?
The view from the other side… »
Radar Weather