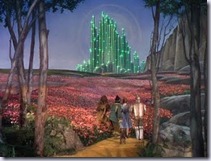 I was riding my bike this morning. listening to an analysis of the Wizard of Oz (two incongruous activities, to be sure), and heard a clip of Salman Rushdie reading from one of his early essays. Titled “Out of Kansas”, it reflects on the tension between “staying” and “leaving”, as played out in the song “Over the Rainbow”.

It made me think: that tension reflects both  the motivations and the doubts that are a daily counterpoint in my expat experience.

My further question, after reading the passage, is whether I migrate in search of roots, or only for escape?

"Anyone who has swallowed the scriptwriter’s notion that this is a film about the superiority of “home” over “away”, that the “moral” of the Wizard of Oz is as sickly sweet as an embroidered sampler — “East west, Home’s best” — There’s no place like home”– would do well to listen to the yearning in Judy Garland’s voice as her face tilts upwards toward the skies.

“What she expresses here, what she embodies with the purity of an archetype, is the human dream of leaving, a dream at least as powerful as its countervailing dream of roots. At the heart of The Wizard of Oz is the tension between these two dreams. But as the music swells and that big clean voice swells into the anguished longings of the song, did anyone doubt which message is the stronger? In its most potent emotional moment, this is unarguably a film about the joys of going away, of leaving the grayness and entering the color, of making new life in the “place where there isn’t any trouble”.

“Over The Rainbow” is, or ought to be, the anthem of all the world’s migrants. All those who go in search of the place where “the dreams that you dare to dream really do come true”. It is a celebration of Escape, a grand paean into the Uprooted Self, a hymn – the hymn — to Elsewhere."