IBM has developed a new form of artificial intelligence that is able to play Jeopardy (ref).  The system, nicknamed Watson, has processed a vast assortment of text documents and had ‘learned’ the likely statistical associations between words and phrases.  Thus, it ‘understands’ that a bicycle is often associated with Holland, Lance Armstrong, and training wheels, and probably not with Shakespere, candlelight, or rain.  This allows it to answer natural language questions of the sort posed on Jeopardy.

I wrote about associative intelligence a couple of days ago, so this development challenges me to ask whether Watson is also ‘thinking’ in the same sense that I do.  I’ve decided not, because the computer can match facts to phrases, but can’t yet understand narrative. 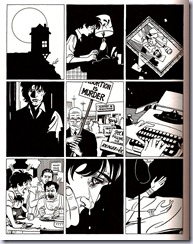 David Lodge once wrote that we organize space through pictures, and we organize time through stories. Its a great insight, echoed by historians such as Arthur Danto, who observed that a data recorder, no matter how good, would never allow reconstruction of accurate histories.  It has no knowledge of cause and effect, motivation, intent, or associations.  With those, you know the story, otherwise its an ambiguous data set.

Similarly, statistical associations, alone, are insufficient basis for human thought.  The sequence of panels in the Hernandez comic above make no sense unless you can reconstruct a plausible narrative around it.  Watson could put them in the proper order based on statistical likelihood that one is more closely associated to another.  But only contextual knowledge and insight into the actors based on learned experience can yield the underlying story, the basis for really answering questions.

Based on those ideas, several of us once built a research system for reconstructing medical events using a narrative approach (US Patent 6,594,634).  I’ve believed that to make sense of medical monitoring data, you have to take Danto’s tack, less dependent on data-based states, trends, and markers and more concerned with developing the story from laboratory, patient, and procedural sources.

Back to Watson, performing a very sophisticated parlor trick.  Remember how Deep Blue played chess by exhaustive search made possible by fast processors, not an expert’s insight into the game.  Watson expands the range of associations by scoring statistical distance rather than game positions, but it’s the same computational deduction rather than contextual understanding.

It would require him to tell a story.

email
« Inside / Outside
The advantages of ruby shoes »
Radar Weather