“You know, this won’t work for much longer…”, said the border control agent, riffling my passport pages.  “Scarcely room for another visa stamp.”

Even with the borderless advantage of the modern EU, passports seem to fill up quickly.  A business trip a month, a vacation every quarter, regular trips to the UK, the pages get used up within a year or so.  Fortunately, the embassy can add pages without issuing a new passport (or you can order your passport in “book form”, with extra pages to begin with).

But, for me, it’s time to get the extra pages inserted.

So, I book an appointment with the US Embassy web site for Amsterdam for Monday, 10:15.  In hindsight, Brussels is closer to Maastricht, but I’d already bought the train ticket.  Two immediate problems surfaced: my new OV chipcard and ubiquitous rail maintenance.

I was two days late in paying my yearly OV Kaart renewal, so NS had to issue an entirely new one.  It seems like the discount would just suspend until I paid to re-activate it, especially since I still use the card for train / tram fare.  I have 29 euros on the old card, which can’t be transferred to the new one without paying 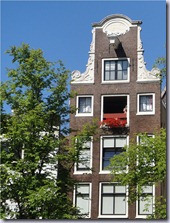 Being more cheap than frustrated, I now use one OV card for payments, the other for discounts.

The discount doesn’t work until 9 am anyway, the hours from 6 am to 9 am considered ‘peak travel’ for Dutch commuters.  Canny commuters will, no joke, buy the full fare to wherever the train stops at 9 am, then get off the train and buy the discount fare for the remainder of the journey.

Rail Maintenance is a summer fact of life, and the odds of encountering an interruption increase the farther I travel.  Today, the system was cut between ‘s-Hertogenbosch and Utrecht,

forcing me off the train and onto the (not so) snelbus. This is a well-meaning innovation for motoring passengers around the construction, but relies on motorways being clear and drivers that know the route.  Morning traffic on the A2 and ‘first trip of the day’ for new drivers is a bad combination: it takes 90 minutes to hop between stations.  I pass the time taking pictures of road art.

I made it to Amsterdam at 9:45, and sorted out a tram to the Museum Park where the embassy is located.

Unfortunately, Amsterdam no longer accepts strippenkaart: the driver waved   me back out the door.  It took some time at the station sorting out which card had the money, (noting that the driver would have accepted money even if he didn’t take a strippekaart).  By 10am, I was ready for a second go at Tram 5.

I used to say that it was a mark of evolution as an expat to move from taking a car to Schiphol to taking the train to taking a bike.  Trams were always the highest challenge: which to board, how to pay, where to stand.  Now, its second nature.

The embassy is it’s usual fortress-like self: raspy box, multiple layers of security, no electronics past the gate, emptying every pocket at the inner office inspection.

The day began at 5 am, and early dash to the train, diversion on the bus, confusion with cards, a new charge for embassy service.  I wondered if I wasn’t painting myself into too many corners.

But, with four hours to kill and a glorious summer day in a fantastic city, maybe it was time to paint into the corners instead,

taking advantage of the time and the setting.

So, I had a leisurely lunch along the canals.  I took a picture of the mimes in Dam Square for my daughter.  I shopped a bookstore.  I walked the Vondelpark and read a book.

I had a thoroughly nice, relaxed day.

If I paint myself into corners, at least I can doodle in the white spaces once I’m there.