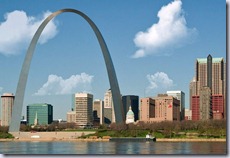 I was listening to a BBC 2 program last night, recounting one correspondent’s adventures along Route 66, the famous US highway from Chicago to Los Angeles.  All along the way, he marveled at how huge things seemed compared to England: the tall buildings, the wide parks, the endless roads, all emblemized by the towering Gateway Arch.

At the time, I was motoring around in my little Fiesta (with the Holland Voetbal flag, of course), just back from a visit to my tiny grocery.  I started thinking about the contrast in the supermarket aisles, the houses, the cars: Europe is cozy.  It’s probably always been that way.  But, stopping in Brugge, I wondered if it didn’t apply more widely and deliberately than just as ‘human scale’ development characteristic of long-standing, traditional villages.

Brugge is a lovely city of canals, cafe’s, and medieval brick buildings, all preserved as a UNESCO World Heritage site.  It hasn’t developed the density of many European cities, and the streets and plazas have a more open and uncrowded feel, even in summer. 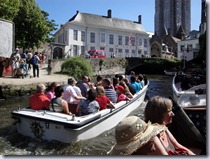 The tour boats, for example, are packed: the operators delay each departure while they push people together and add a few more on.

Cafe’s push tables together; it’s not unusual to have to pull in elbows a bit while eating to avoid disturbing my neighbor.

And then there’s the herding and pressing that goes with trains, trams, and RyanAir. 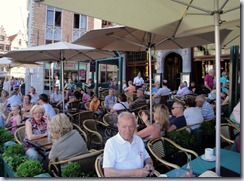 On the one hand, it’s the way that merchants make the most of their limited space, maximizing the number of paying customers.  But most Americans wouldn’t patronize places where they didn’t have some sense of space around them, even in public venues (rock concerts excepted).

So do different cultures simply tolerate less space, or do they simply prefer less space?

I was thinking that Europeans prefer less space.  But then I think again of the symbolism of the Gateway Arch, beckoning settlers on to the vast prairies beyond.  And those most drawn to it were these same Europeans?