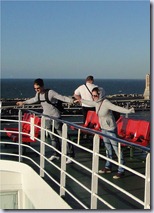 No clever human being is so interesting that he can’t make himself more interesting still by acting retarded at random intervals.  -Walter Kirn

I’m at the point where all of my chips have been pushed onto the center of the table, betting that life’s hand that I’ve built up during the past year is a winner.

This is the pivotal week when the cards are turned over: a major pitch in Cambridge, diligence visits to demo a system for leading physicians and investors, a series of payments due to arrive to float my depleted bank accounts.

If this fails, I’m literally out of the money, out of alternatives, back to square one.

So, I’m distracted, tense, stressed, which makes me stupid.  Little things get overlooked; unimportant things get forgotten.   Fortunately, I have good friends who can see how that makes me human.

50% of your time should simple be spent thinking.  — P. Hiscocks

The Internet has made it really easy to lose yourself in other people’s ideas and facts and never discover any of your own.  Hence the myriad ways that Google is making us stupid (or, at least, in Nicholas Carr’s estimation, different).

My academic advisor at Cambridge recommended that I log off during my thesis research.  He favored long periods by the river, watching clouds and listening to wind, giving one’s mind some quiet time to synthesize.  Slate notes that getting uninterrupted time off to  read, write, or reflect seems to restore the mind’s capacity to think.  It makes an intresting case for Bill Gates’ style of having twice-yearly “Think Weeks”.

Earlier in the decade, rates of growth for both the numbers of blogs and those visiting them approached the vertical; now traffic is stagnating, while Facebook grew 66% last year and Twitter by 47%…for maintaining an online journal or sharing links or photos with friends, Facebook and Twitter are quicker and simpler.  — An empire gives way, the Economist.

I mourn the death of the long-form essay: there are a lot of good people practicing it.  How can you say anything meaningful in 140 characters?  A quip, a double-entendre, a pun: not a real thought, insightful juxtaposition, or reasoned argument.

‘can’t end without a Dutch quote for football season, especially now that we’re in the finals.  With Germany the likely opponent, it’s worth being aware of the history between these two clubs; hopefully the madness subsides this week.