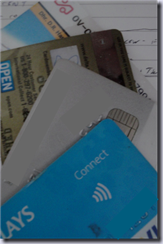 The Chicago Tribune recently published advice to travelers about paying for goods with credit cards in Europe.  The prevalence of Chip and PIN systems has diminished reliance on magnetic card readers,they report, leading to situations where "In some of the smaller shops, some of the clerks are young, and have not used magnetic stripe cards themselves, so they don’t know what to do, and automatically decline them."

Actually, everyday life hasn’t gotten that bad.  But Europeans do use a variety of electronic payment systems that are unfamiliar in the US.

It’s worth starting with the observation that you can always pay with contant geld (literally, ‘hard money’).   This is much easier (although less fun) now that most countries accept euros.

The next step up is a pre-loaded cash card, in which a balance has been transferred to an electronic chip.  I carry about 20 euros on my Fortis card, the ChipKnip, which I use to pay for parking.  A similar idea is the OV-chipkaart for train travel (or Oyster for the London Underground) which are swiped past readers to pay for services.  Card balances can be checked at reading stations located next to most ATM machines (or in train stations for OV cards).  However, if you lose the card, you lose the money.

Most commonly used are bank debit cards (Maestro, Electron), which take money directly from your account, and bank credit cards (Visa) which debit your account for the full accumulated amount at the end of each month.  These are all Chip-and-PIN: insert the chip into the reader after the cashier has rung up the purchases, verify the amount, and conclude with your PIN code.

The credit cards, in particular, are less convenient than in the US.  There is no online access to the charges: a statement is mailed at the end of each month just after the charges are paid, and there’s no opportunity to decide what portion to pay.  Credit limits are generally lower and harder to get raised than with US cards.  There are no matching airline miles.

And, in restaurants, it’s generally customary to leave a cash tip rather than to add it to the card when you pay.

I do have one US card, my American Express, which has a mirror-gloss magnetic stripe and no chip.  As the Tribune article warns, I have had trouble using it.  One gas station attendant insisted that I buy something with it to demonstrate that it worked before  allowing me to buy gas.

Generally, my US credit and debit cards all work fine: I don’t use them because foreign transaction and currency exchange fees add up.  The only hiccups I’ve noticed are that bank debit cards sometimes stop working on the weekends when US computers are down for their weekly maintenance.

Traveler’s cheques seem much less familiar, and merchants have made me go to a currency exchange to cash one.

The most frightening alternative is the new Barclay Connect card, a variation on the swipe card that “allows consumers to make payments of £10 or less without having to even remove the card from their wallet.”  As a security measure, only six or seven contactless transactions in a row are permitted before customers are forced to verify their identity by using Chip-and-PIN again.

Call me a Luddite, but I’m scared to even try it.  It’s a direct debit rather than a debit against cash stored on the card, and I don’t like having cash disappear without my participation.